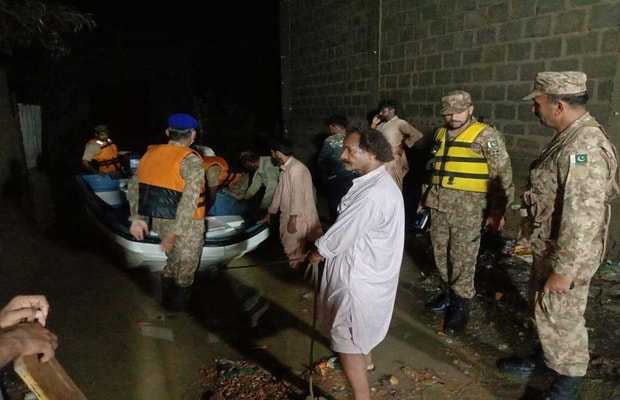 COAS General Bajwa has directed Karachi Corps to step up flood relief operations and to assist affected people due to recent rains in interior Sindh and Karachi.

“Troops must reach out to the affected population in distress and extend all necessary care”, COAS.

According to the Inter-Services Public Relations (ISPR), more than 70 Army and Pakistan Rangers Sindh rescue and relief teams are assisting civil administration to provide relief to the affected population.

In a statement released on Tuesday, ISPR said, “Due to heavy rains in Karachi, various parts of the metropolitan city got badly affected. Besides rainfall in Karachi, downpour also occurred in Kirther Ranges which lead to overflow of Lath and Thado dam”.

“Three army engineering teams are deployed along Mehran drain to avoid its spillover to save K-Electric Grid station, Saadi town and Malir Cantt areas,” the media wing said adding that relief and rescue teams are busy in shifting the people to safer places and providing shelter and cooked food to them.

tweet
Share on FacebookShare on TwitterShare on PinterestShare on Reddit
Saman SiddiquiAugust 26, 2020
the authorSaman Siddiqui
Saman Siddiqui, A freelance journalist with a Master’s Degree in Mass Communication and MS in Peace and Conflict Studies. Associated with the media industry since 2006. Experience in various capacities including Program Host, Researcher, News Producer, Documentary Making, Voice Over, Content Writing Copy Editing, and Blogging, and currently associated with OyeYeah since 2018, working as an Editor.
All posts bySaman Siddiqui