Casulties fear to rise given the nature of injuries. 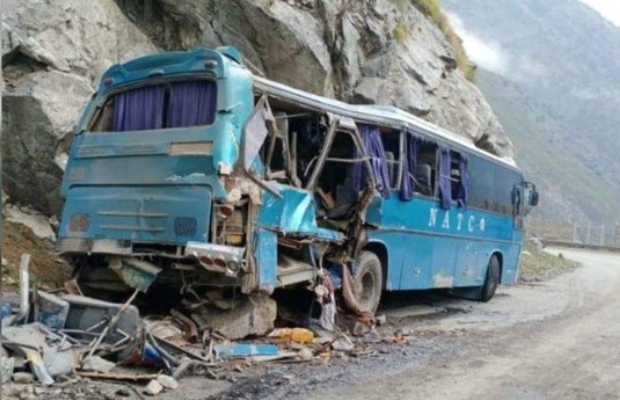 10  people, including four Chinese nationals, were killed and scores injured in a blast targeting a bus in northern Pakistan on Wednesday – the bus was carrying over 30 Chinese engineers to the site of the Dasu Dam in the Upper Kohistan district.

The death toll fear to rise given the nature of injuries.

As per the AFP report, further 31 Chinese nationals were injured in the blast in the Upper Kohistan district in this incident.

According to Upper Kohistan Deputy Commissioner Arif Khan Yousafzai, the blast took place early in the morning around 7:30 am when a coaster was carrying over 30 workers, including Chinese engineers, from the Barseen camp to the plant site.

Other than engineers, Frontier Corps personnel and local labourers were also aboard the bus when an explosion – the cause of which has yet to be ascertained – took place, he added.

Bodies and the injured have been shifted to the  Upper Kohistan District Headquarter Hospital, officials said.

While the site had been cordoned off by police and Rangers and investigation is underway.

The Wapda spokesman has confirmed that employees of a Chinese company were travelling in the bus, adding that rescue efforts were under way at the site of the incident and the injured were being shifted to a hospital.

tweet
Share on FacebookShare on TwitterShare on PinterestShare on Reddit
Saman SiddiquiJuly 14, 2021
the authorSaman Siddiqui
Saman Siddiqui, A freelance journalist with a Master’s Degree in Mass Communication and MS in Peace and Conflict Studies. Associated with the media industry since 2006. Experience in various capacities including Program Host, Researcher, News Producer, Documentary Making, Voice Over, Content Writing Copy Editing, and Blogging, and currently associated with OyeYeah since 2018, working as an Editor.
All posts bySaman Siddiqui