The death toll in forest blazes has surged to nine in over a week. 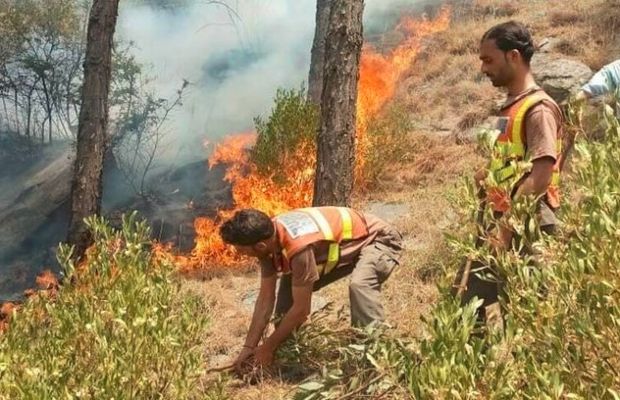 Rescue 1122 and the forest department have amped up their efforts to extinguish the blaze in various locations.

In the latest development, the settlements are at risk in the Marghuzar area of the Swat district.

On Sunday, the wildfires in the Marghazar mountains of Swat, a tourist hotspot, continued to rage for the second day.

According to a spokesperson of the rescue department, Shafiqa Gul, the fire erupted in the jungles as well as on the mountain range on Saturday.

“A team of 45 firefighters was dispatched to the site Immediately after we received the news,” he said.

Reportedly, over 200 wildfires damaged forests and pastures over an area of 14,430 acres in various districts of the province during the past two weeks.

According to an investigation led by the authorities, of the 210 wildfire incidents, some 55 blazes were started intentionally by local people and 12 were ascribed to dry weather conditions while the cause of another 143 blazes was unknown.

tweet
Share on FacebookShare on TwitterShare on PinterestShare on Reddit
Saman SiddiquiJune 12, 2022
the authorSaman Siddiqui
Saman Siddiqui, A freelance journalist with a Master’s Degree in Mass Communication and MS in Peace and Conflict Studies. Associated with the media industry since 2006. Experience in various capacities including Program Host, Researcher, News Producer, Documentary Making, Voice Over, Content Writing Copy Editing, and Blogging, and currently associated with OyeYeah since 2018, working as an Editor.
All posts bySaman Siddiqui