The man reportedly shouted "Down with Macron-ism" as he slapped the president, as well as "Montjoie, Saint-Denis" 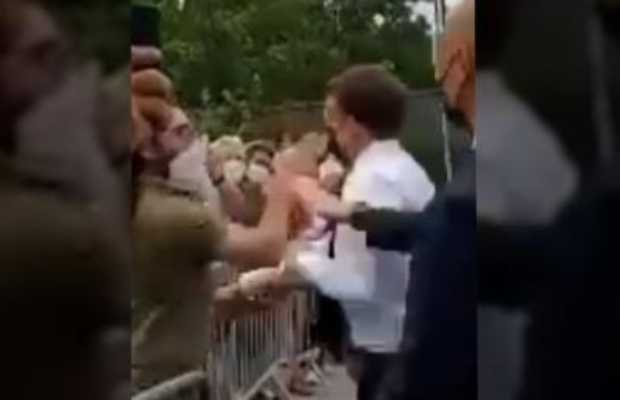 French President Emmanuel Macron received a slap by a member of the public on Tuesday and the video of the incident has gone viral on social media.

The incident occurred on Tuesday as the French President visited the southeastern region to meet restaurateurs and students to talk about how life is returning to normal as the country’s COVID lockdown eases.

The viral video clip shows a man dressed in a green T-shirt wearing glasses and a face mask shout “Down with Macronia,” (Down with Macron-ism) before slapping Macron.

During the incident, the man — whose identity and motives were initially unclear — could also be heard shouting “Montjoie Saint Denis,” which is a medieval battle-cry used by the Capetian royal dynasty, which ruled France from the 10th to the 18th century.

The video clip of the incident has gone viral on social media.

What’s been the reaction?

Prime Minister Jean Castex told the National Assembly shortly afterward the incident that while democracy meant to debate and legitimate disagreement “it must never, in any case, mean violence, verbal aggression, and even less physical attack”.

“We can attack him politically” but any violence against him should be condemned in a democracy, she added.

However, many anti-Macron social media users came out celebrating the incident.

not to be dramatic but this man has literally all my respect.#Macron pic.twitter.com/p1n0yNiNtr

French president macron got slapped and my day is made 😂
That sounded pretty sweet ngl 🙊#macron #macronslapped #Frenchpresidentslapped #Islamophobia pic.twitter.com/zIc7K9yMQC

tweet
Share on FacebookShare on TwitterShare on PinterestShare on Reddit
Saman SiddiquiJune 8, 2021
the authorSaman Siddiqui
Saman Siddiqui, A freelance journalist with a Master’s Degree in Mass Communication and MS in Peace and Conflict Studies. Associated with the media industry since 2006. Experience in various capacities including Program Host, Researcher, News Producer, Documentary Making, Voice Over, Content Writing Copy Editing, and Blogging, and currently associated with OyeYeah since 2018, working as an Editor.
All posts bySaman Siddiqui