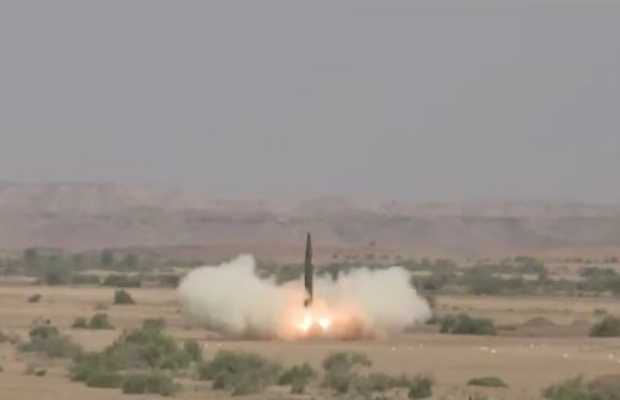 The Inter-Services Public Relations (ISPR) in a statement on Thursday notified about the successful training launch of surface-to-surface nuclear-capable ballistic missile launch.

“The training launch was aimed at ensuring operational readiness of Army Strategic Forces Command (ASFC) and re-validating technical parameters of the weapon system,” the statement added.

Commander Army Strategic Forces Command Lt Gen Muhammad Ali appreciated the excellent standard of training, handling of the weapon system and execution of the launch mission in the field by troops.

While the president of Pakistan Dr, Arif Alvi, prime minister Imran Khan, chairman joint chiefs of staff committee and the services chiefs also congratulated all ranks of ASFC, scientists and engineers on the successful conduct of the launch.

Earlier in Feburary this year, , Army Strategic Forces Command had cond­ucted a ‘training launch’ of Ghaznavi as part of its annual field training exercise.

“The missile is equipped with a proper terminal guidance system. In recent years tro­ops from the ASFC have conducted several training launches to check the handling and operating of the complex weapon system,” the ISPR stated at the time.

tweet
Share on FacebookShare on TwitterShare on PinterestShare on Reddit
Saman SiddiquiAugust 12, 2021
the authorSaman Siddiqui
Saman Siddiqui, A freelance journalist with a Master’s Degree in Mass Communication and MS in Peace and Conflict Studies. Associated with the media industry since 2006. Experience in various capacities including Program Host, Researcher, News Producer, Documentary Making, Voice Over, Content Writing Copy Editing, and Blogging, and currently associated with OyeYeah since 2018, working as an Editor.
All posts bySaman Siddiqui