The ATC accepted the ex-prime minister’s bail plea against a surety of Rs100,000/- 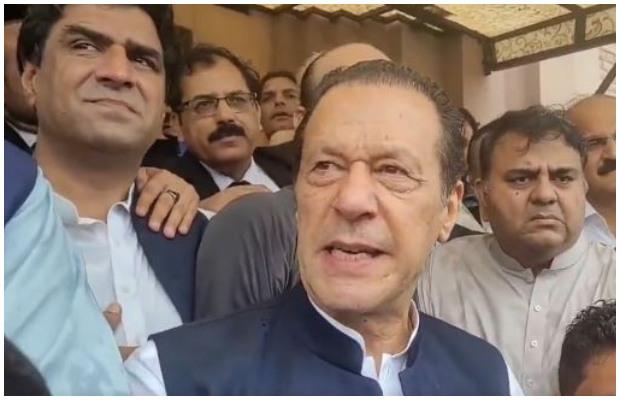 Imran Khan has secured a pre-arrest bail until Sept 1 in a terror case!

His plea for bail in the terrorism case was filed in an ATC at the Federal Judicial Complex in Islamabad today, prior to his arrival at the court.

The plea stated that the case was registered against the PTI chief by police as an “act of revenge”.

Later, additional sessions judge Tahir Abbas Supra granted him interim bail till September 7 in the case pertaining to the alleged violation of Section 144. This relief was provided against a surety of Rs5,000.

The court also issued notice to the police and sought their response.

The former prime minister has been booked in a terrorism case for his controversial remarks about a female judge at a public rally while a separate first information report (FIR) has been registered against him on charges of violating Section 144 (ban on public gatherings exceeding four persons) in the capital on the day of the rally.

Imran Khan spoke to the media after getting an extension on his bail.

Talking to the media while leaving the ATC after being granted pre-arrest bail, PTI chairman Imran Khan stood by his claim about the sexual assault of Shahbaz Gill.

Imran Khan said that Shahbaz Gill had been assaulted sexually, adding the PTI would take legal action against the police in that regard.

He added that when one talked about taking legal action, cases were made against one.

“What type of joke is this?” he questioned.

Imran Khan speaks to the media after getting an extention in his bail. #ImranKhanArrest pic.twitter.com/gYYoLAfPOY