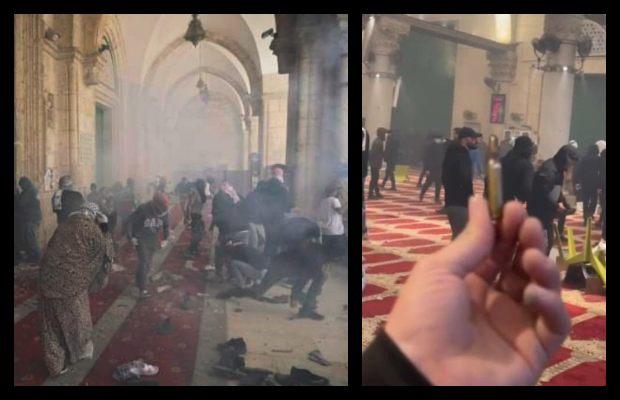 Israeli occupation forces raided one of the holiest sites in Islam, Al-Aqsa Mosque, on Friday at the break of dawn.

As many as 152 people were injured in the attack and 400 others were arrested.

A six-hour clash broke out Friday in the Al-Aqsa compound between Palestinian worshipers and the Israeli police force turns out to be the biggest escalation in Jerusalem since the holy month of Ramadan began.

According to the Mosque authorities, Israeli police entered before dawn, after 7 Palestinians were killed since Wednesday.

The Palestinian Red Crescent emergency service said it evacuated the majority of the injured to hospitals.

The endowment said one of the guards at the site was shot in the eye with a rubber bullet.

The video clips and images emerging on the Twitter feed along with the hashtag #AlAqsaUnderAttack show the chaos that Israeli forces struck at the Al-Aqsa Mosque.

I can't wait to hear the Zionists spin on this. #Israeli occupation forces brutally assaulting a journalist. #AlAqsaUnderAttack pic.twitter.com/KoN1EwckX2

Until this moment, the occupation forces did not leave anyone in Al-Aqsa Mosque except and assaulted them

“The moment when the Israeli occupation forces took over the blessed Al-Aqsa Mosque to break historic glass windows, and throw bombs/live ammunition on worshippers.” #AlAqsaUnderAttack pic.twitter.com/yX2jEhw8Du

On the other hand, the Israel Police said they entered the Temple Mount compound after masked men, carrying Hamas and Palestinian Authority flags, threw stones and set off fireworks after prayer at 4 A.M.

Israel Police forces entered the compound only after the prayer ended and Palestinians there continued throwing rocks and setting fireworks after police arrived, the statement claimed.

tweet
Share on FacebookShare on TwitterShare on PinterestShare on Reddit
Saman SiddiquiApril 15, 2022
the authorSaman Siddiqui
Saman Siddiqui, A freelance journalist with a Master’s Degree in Mass Communication and MS in Peace and Conflict Studies. Associated with the media industry since 2006. Experience in various capacities including Program Host, Researcher, News Producer, Documentary Making, Voice Over, Content Writing Copy Editing, and Blogging, and currently associated with OyeYeah since 2018, working as an Editor.
All posts bySaman Siddiqui