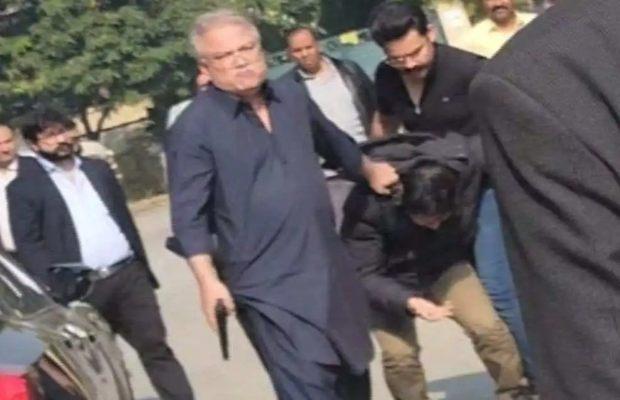 Journalist Mohsin Baig has been arrested in Islamabad on Wednesday afternoon.

According to the details Federal Investigation Agency’s (FIA) cybercrime wing and police arrested Daily Jinnah and Online news agency Editor Mohsin Jamil Baig after conducting a raid on his house in Islamabad.

According to FIA officials, the raiding team was fired upon and after an hour of resistance, Mohsin Baig was arrested.

Officials said that action was taken at the request of Federal Minister Murad Saeed.

A video of the FIA ​​raid also came to light in which Mohsin Baig can be seen holding a pistol in his hand and in the video a few moments later there is a sound of 2 fires.

An FIA sub-inspector was injured in the firing. According to family sources, Mohsin Baig had fired in his defense.

Firing during arrest of #mohsinbaig in Islamabad by FIA n Islamabad police… https://t.co/M60aBrF2Fc

As being reported,  Baig earlier had appeared in a talk show at a private news media outlet where he leveled allegations on the personal life of Prime Minister Imran Khan. A social media campaign began on his statements, prompting reactions from the government and opposition leaders.

Special Assistant to the Prime Minister Shahbaz Gill said that Mohsin Baig has been running a news agency and advertising business. He alleged that Mohsin Baifwas taking advantage of every government.

It should be noted that Mohsin Baig had criticized the Federal Minister including the Federal Government in recent TV programs.

Baig’s son told Geo News that FIA officials in plainclothes came to the house earlier today and arrested his father.

“Initially, we thought that they (FIA personnel) are thieves and opened fire in the air but later they introduce themselves as law enforcers. We also asked them to show arrest warrants but they didn’t have. Meanwhile, a police party also came to our house.”

The FIA “faced resistance” during the raid and “dragged” the journalist to the van.

On the other hand, a petition against the illegal detention of journalist Mohsin Baig has been filed at the Islamabad court.

Additional Sessions Judge Zafar Iqbal, while hearing the petition, appointed a bailiff and ordered to produce Mohsin Baig to the court.

According to lawyer Raheel Qureshi, people in plainclothes came to Mohsin Baig’s house early in the morning. It is not known who the people were and where they took Mohsin Baig.

According to the lawyer, the arrest warrant and search warrant were not sought from the SP and DSP. The SP ordered plainclothes men to raid the house and the plainclothes men beat the children, smashed mobile phones, and took away Mohsin Baig.