The protester were notified to hold their rallies on specific routes asking that it should be end before 5 p.m. BST. 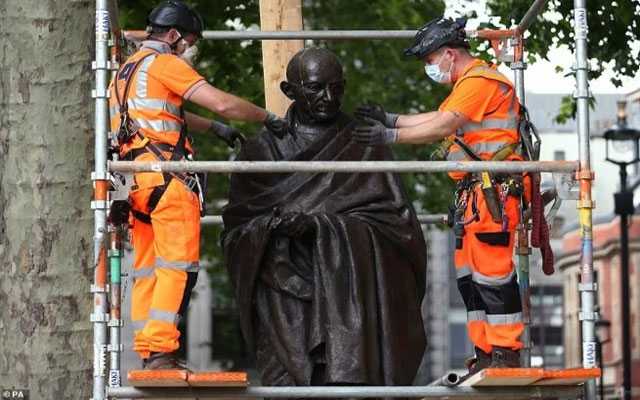 As the protests across London voicing concerns for the racial discrimination on the killing of an unarmed blackman George Floyed was scheduled, London police ahead of the demonstrations has placed strict limits on Saturday.

The restrictions on “Black Lives Matter” protesters were imposed by the Metropolitan police in London to all the parties that have planned to hold rallies in the capital.

The protester were notified to hold their rallies on specific routes asking that it should be end before 5 p.m. BST.

Security officials in the metropolis urged the protestors not to hold gatherings due to the pandemic measures and asked them protest in other ways.

“We are asking you not to come to London, and let your voices be heard in other ways,” Met Commander Bas Javid said.

Dozens of monuments across the U.K. have been covered and boarded up by the government to protect it from anti- racism Black Lives Matter protestors who have threatened almost 60 statues of historic leaders to bring them down across the country, who expressed racist views towards black people.

Mahatma Gandhi’s statue outside the British Parliament was among several monuments that has covered and boarded up in London by the authorities, ahead of the second planned protests to condemn racism vandalizing it.

The protesters called for the exclusion of Gandhi’s statuettes in London, Leicester, Manchester and Bloomsbury, citing the fact that Gandhi was an open racist against Africans and called them inferior.

The campaigners of the Black Lives Matter protest targeted Gandhi’s and UK Prime Minister Winston Churchill’s statuettes and “Racist” was written under Gandhi’s statue by protestors.

London Mayor Sadiq Khan said that the Metropolitan Police were working on a “robust” policing plan to keep the citizens safe and to prevent disorder, including covering up key landmarks.