“We have to accept that the U.S. cannot forever be the supreme nation in the world that can have the best technology in the world,” he said. 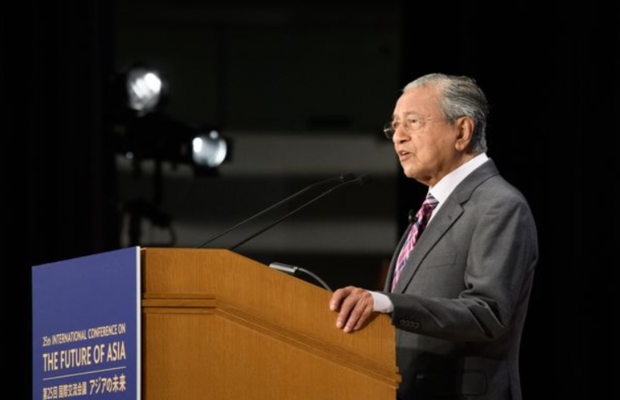 Malaysian Prime Minister Mahathir Mohamad has voiced support for Huawei, rebuking a US blacklist that includes the Chinese telecoms giant.

Speaking at a conference in Tokyo on May 30, 2019, Mahathir said Malaysia will use Huawei technology “as much as possible”.

The prime minister also said the West must accept that Asian nations now have the capacity to produce better goods and that the US should stop “threatening” other countries.

“We are too small to have any effect on a huge company like Huawei, whose research is far bigger than the whole of Malaysia’s research capability,” Mahathir replied during a question and answer session at a conference which was sponsored by Japan’s Nikkei media group.

Huawei ‘can spy as much as they like,’ says Malaysia’s Mahathir Mohamad.

“But what is there to spy in Malaysia?” he asked.

Malaysian PM also said that the U.S. pressure on Huawei, along with the dispatching of warships to the South China Sea, demonstrate a weakening of the country and those actions show it needs to compete with China rather than confront it.

“We have to accept that the U.S. cannot forever be the supreme nation in the world that can have the best technology in the world,” he said.

“Sending battleships into the area and carrying out exercises that may result in some strong confrontation” is not the answer he further added.

During his speech at the conference, Mahathir said China’s rise is undeniable, and confronting it militarily is dangerous.

“We are still thinking of wars between China and other countries now that China has become rich and powerful,” he said. “When it was poor we feared China, now that it is rich we also feared China.”

tweet
Share on FacebookShare on TwitterShare on PinterestShare on Reddit
Saman SiddiquiJune 1, 2019
the authorSaman Siddiqui
Saman Siddiqui, A freelance journalist with a Master’s Degree in Mass Communication and MS in Peace and Conflict Studies. Associated with the media industry since 2006. Experience in various capacities including Program Host, Researcher, News Producer, Documentary Making, Voice Over, Content Writing Copy Editing, and Blogging, and currently associated with OyeYeah since 2018, working as an Editor.
All posts bySaman Siddiqui