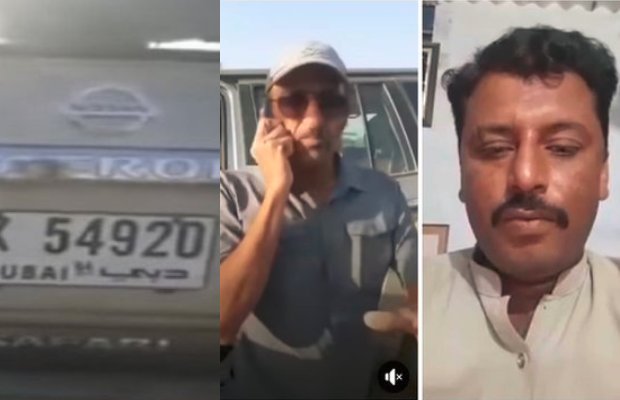 As being reported,  MPA and his men allegedly tortured to death a man in Mamon Goth who forbade some foreigners from hunting houbara bustards and made a video of their illegal hunting.

The video was later uploaded on social media that is alleged to have angered the foreign hunters and their influential local hosts.

Reportedly, Nazim, 30, happened to come across some foreigners who were hunting houbara bustard. He told them that it was illegal to hunt this bird down. But they continued with their hunting game. Nazim made a recording of it and later uploaded it on social media.

Later Nazim was abducted and his tortured body was found in a farmhouse of MPA Jam Awais Gohram Jhokio in Murad Goth, Malir. The body of the deceased was covered in bruises and abrasions.

The video of the argument before the murder has gone viral on social media while following the news #JusticeForNazimJokhio is trending on Twitter.

In the video man can be seen showing a Dubai number plate Safari Patrol parked in the middle of an unpaved road, blocking the route.

As the victim confronts people present in the car and asks reason to block the road, a passenger sitting next to the driving seat steps out of the car and snatches his phone.

Yet, another has been killed by feudal lords in Sindh to impress their Arab friends ( probably visiters for hunting). Nazim was killed by a feudal lord from Shikarpur for "the heinous crime" of making a Facebook live video 👇. #JusticeForNazimJokhio pic.twitter.com/20RHRe3YXP

According to the police, the two men have been arrested.

FIR has been filed against PPP MPA Jam Awais Jokhio for torturing to death Nazim Jokhio, father of four, for trying to prevent Arab hunters from illegal hunting

A case has been registered under section 302, 34 of the Pakistan Penal Code on the complaint of the victim’s brother Afzal Ahmed Jokhio.

The family and neighbors staged the protest outside Memon Goth police station and demanded an arrest of the foreign nationals blocking the national highway.

tweet
Share on FacebookShare on TwitterShare on PinterestShare on Reddit
Saman SiddiquiNovember 4, 2021
the authorSaman Siddiqui
Saman Siddiqui, A freelance journalist with a Master’s Degree in Mass Communication and MS in Peace and Conflict Studies. Associated with the media industry since 2006. Experience in various capacities including Program Host, Researcher, News Producer, Documentary Making, Voice Over, Content Writing Copy Editing, and Blogging, and currently associated with OyeYeah since 2018, working as an Editor.
All posts bySaman Siddiqui