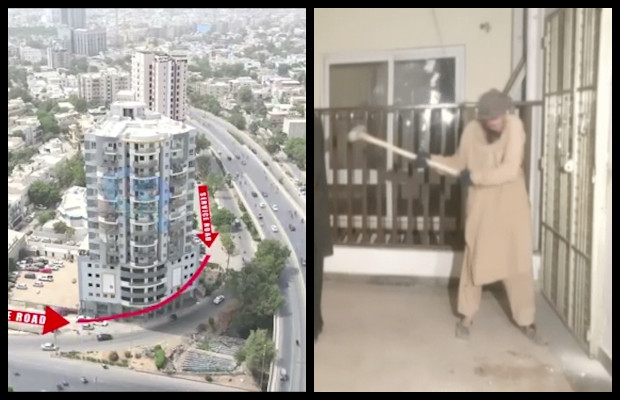 A team of Sindh Building Control Authority (SBCA) and the local administration has started demolishing Nasla Tower on Monday.

However, the SBCA was stopped from carrying out the pre-demolition work of Nasla Tower over safety concerns.

The SBCA had initiated the work on the directives of Karachi Commissioner Muhammad Iqbal Memon.

However, Ferozabad Assistant Commissioner Asma Batool has halted the demolition work on the grounds of safety concerns.

“The demolition process has been stopped for a while because of the safety concerns of the passers-by as huge blocks fell on the road during the demolition of the building, she added.

She further added that without proper safety measures, no demolition could take place because it could cause damage to human lives.

“After consulting with the high-ups, the demolition work would resume,”  she added.

East Deputy Commissioner Asif Jan said that they have started demolishing the building in a conventional way. He had said that the SBCA team is also with them.

Initially, the team is demolishing the doors, windows, walls of the building.

No decision has be been taken for demolition of the building structure, DC Jan added.

The Supreme Court of Pakistan last month ordered the demolition of the Nasla Tower.

A multi-storey residential building situated at the Shahrae Faisal was declared to have been built on encroached land by the Supreme Court on June 16 this year.