Total Cases
|
News Updates
HomeNewsNawaz Sharif departs for London, but not everyone is happy about that!
News

Nawaz Sharif departs for London, but not everyone is happy about that!

The air ambulance arrived at 8:45 am at Lahore Airport, left for Qatar as its first destination. 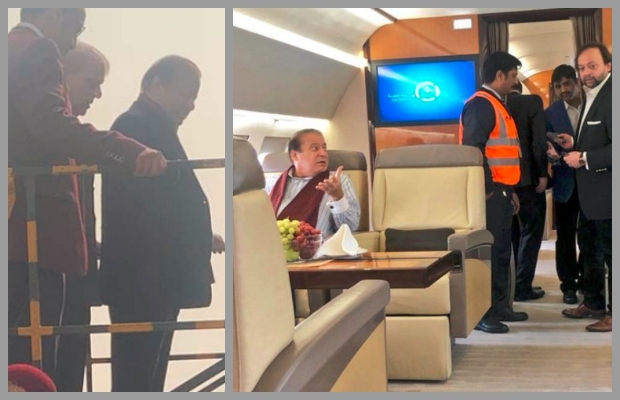 Read More : Nawaz Sharif will leave for London on Tuesday

The air ambulance arrived at 8:45 am at Lahore Airport, left for Qatar as its first destination, from where it will continue its journey towards London.

PML-N’s supremo’s personal physician took to social media announcing that the air ambulance, equipped with an intensive care unit and an operation theatre, carrying Nawaz Sharif had arrived from Doha.

However, not everyone seems to be happy with this latest development. Reactions over this situation are pouring in on social media.

Can anyone explain me the rationale behind taking a critically ill patient to London via Doha through an air ambulance when:

Whereas Travel time from Lahore to London is mere 7 hrs 🤷🏻‍♂️

However, the flight's call sign on Flight Radar is A7Med – but that could be given by the airline itself even if it's not actually an air ambulance

Wearing a suit into an air ambulance. Never knew Mian Saab was so stylish! #NawazSharif 🕴️

There isn't even a single doctor and hospital in our whole country that can treat and control the decline of blood platelets number.
This is alarming Indeed!!
#بھاگ_نواز_بھاگ #NawazSharif pic.twitter.com/Pj4zF6amRq

On November 16, the Lahore High Court had allowed Nawaz to travel abroad for medical treatment for 4 weeks.