The hosts won by 43-41 in a thrilling neck-on-neck final. 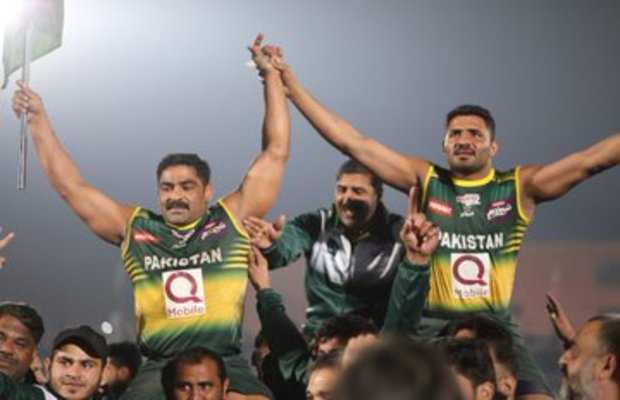 The final match has been an absolute thriller, as Pakistan decided to raid first after winning the toss. In the starting, India was leading and maintained the margin of a couple of points until the first session was over.

However, the contest for the world title remained neck-on-neck throughout the allotted time, two sessions of 20 minutes each with a break of five minutes.

The hosts won by 43-41 in a thrilling final match.

This was the first Kabaddi World Cup was held in Pakistan. India has hosted all of the previous six circle-style kabaddi world cups, with the most recent event taking place in 2016.

In the 8-day long tournament, the matches were held in Lahore, Faisalabad, Kartarpur and Nankana Sahib.

Over the historic win, social media kept buzzing with congratulatory messages, and to be noted Pakistani cricket players were also keenly watching the final.

COAS extends felicitations to Pakistan team on winning Kabaddi World Cup 2020. All participating teams performed well. Both finalists, competing in true spirit of the game, displayed exceptionally high standard of expertise in a closely contested game and deserve to be applauded

What an entertaining final Pakistan is the world champions of the 2020 Kabaddi amazing final of a fantastic tournament which I always look forward to! 🙌🏼#KabaddiWC2020 #ibleedgreen 🇵🇰 pic.twitter.com/EvEs2j9Mvk

43-41 is the final score. And that’s after being down after the first half. Fantastic effort from the boys to crown Pakistan Kabaddi champions. Thank you to all teams for coming to Pakistan! #KabaddiWC2020 #ibleedgreen 🇵🇰 pic.twitter.com/pkrpLf97rz

Who’s watching the Kabaddi World cup final and what entertainment this is?!!
Crowd is electric and so is the action on field. Fantastic comeback by Pakistan🇵🇰 #KabaddiWC2020 🙌🏼

Respect to Pakistan Kabbadi team for winning their first ever World Cup and congratulations to everyone who was involved in making #KabaddiWC2020 happen in Pakistan. And the nail bitting final was just perfect. Mubarak everyone 🇵🇰🏆 @FlaminkoInc @AmeemHaq pic.twitter.com/NGCS8fcrL2

tweet
Share on FacebookShare on TwitterShare on PinterestShare on Reddit
Saman SiddiquiFebruary 17, 2020
the authorSaman Siddiqui
Saman Siddiqui, A freelance journalist with a Master’s Degree in Mass Communication and MS in Peace and Conflict Studies. Associated with the media industry since 2006. Experience in various capacities including Program Host, Researcher, News Producer, Documentary Making, Voice Over, Content Writing Copy Editing, and Blogging, and currently associated with OyeYeah since 2018, working as an Editor.
All posts bySaman Siddiqui