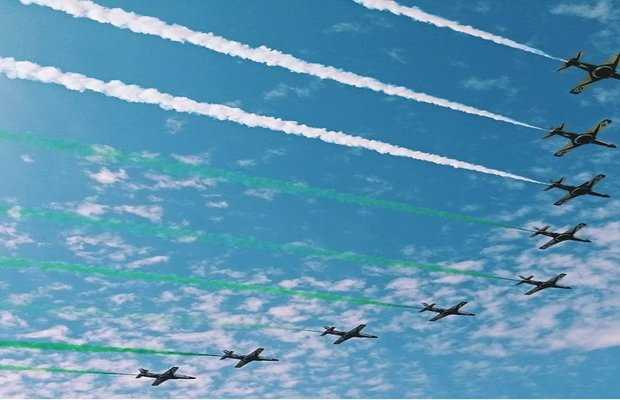 It was on this day last year when the PAF carried out Operation Swift Retort and shot down two Indian Air Force fighter aircraft.

‘Surprise Day’ is being celebrated today in Pakistan to pay tribute to the retaliatory attack of PAF after India’s botched airstrike last year.

Addressing a ceremony in connection with 27th February held in Islamabad today, Air Chief Mujahid Anwar Khan said that Pakistan Air Force along with other services is fully prepared to counter any threat to the country.

He further added that we will not make any compromise on the sovereignty and territorial integrity of Pakistan.

The special air show included special flypasts and formations by F-16, Mirage, and JF-17 Thunder jets while PAF helicopters also presented a flypast to pay tribute to the armed forces. The show also included a special performance by Sherdil Squad of Air Force, demonstrating aerobatics formations and spreading colors of the national flag in the air.

Many of the citizens took to social media contributing their tributes to PAF, making the hashtags #WorldsBiggestTeaParty, #SurpriseDay to trend top on twitter in Pakistan.

tweet
Share on FacebookShare on TwitterShare on PinterestShare on Reddit
Saman SiddiquiFebruary 27, 2020
the authorSaman Siddiqui
Saman Siddiqui, A freelance journalist with a Master’s Degree in Mass Communication and MS in Peace and Conflict Studies. Associated with the media industry since 2006. Experience in various capacities including Program Host, Researcher, News Producer, Documentary Making, Voice Over, Content Writing Copy Editing, and Blogging, and currently associated with OyeYeah since 2018, working as an Editor.
All posts bySaman Siddiqui