In a heartbreaking video, the widow of former director PDMA shared details about her husband Khalid Sherdil, who was a dutiful officer of the government. 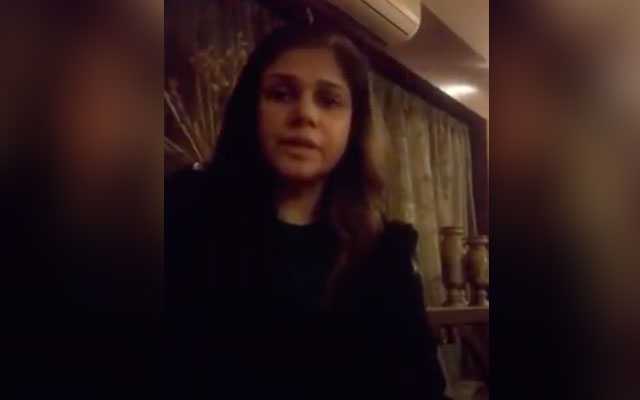 The PIA plane crash that happened last Friday in Karachi claimed dozens of precious lives. The whole nation is mourning this great tragedy. Several days have passed since the tragic incident, people across the country still not recovered  bodies of their loved ones.

In a heartbreaking video, the widow of former director PDMA shared details about her husband Khalid Sherdil, who was a dutiful officer of the government.

Sharing details of her marriage with the ex-government officer with teary eyes, the woman who introduced herself as wife of Khalid Sherdil urged PM Imran Khan and Army Chief to look into the matter. “It has been days since the crash but Sherdil’s body is yet to be recovered.”

“My name is Amna Cheema and I am the wife of Khalid Sherdil; who is still missing in the crash that occurred on Friday 28 Ramadan. I want to tell, Khalid and I had bond and association for the last 16 years,” she said.

Amna went on to say, “Khalid never remained a traditional husband, Khalid has been a friend for me. When we got married he was doing a PhD in Canada, and I was going to study in the US. He always encouraged me he contributed to all aspects of my life; he gave me my own space so that I could achieve anything.”

“Whatever I am today I can’t thank him enough”, she said with tears in her eyes. “I hope that Khalid comes back; I hope that DNA samples don’t match. Khalid was an unusual person it is difficult for people to understand him and our relationship,” said the grieved wife.

“He was such a shining and dedicated officer who was workaholic and gave his all to the institution”, the woman said adding that, “soon after my studies got completed, the flood of 2010 came. He avidly came back to Pakistan and became DG PDMA. In the field of disasters he introduced satellites system”.

“He was posted in Balochistan for 5 years but never hesitated. Many of his colleagues got martyred in Balochistan in 2 bomb blasts. For his nation he went into jeopardy. I also had a lucrative job in UN, New York but Khalid insisted and urged me to come back to Pakistan saying, ‘you are young, it is the time serve the country.’”

“Khalid was a bright officer who never hesitated for his country and was a positive person; he always used to give a vision wherever he goes,” said Amna.

“Mr. Prime Minister, being a government officer Khalid is part of your team. Today Khalid is missing it’s been 5 days, there is a slight mess in Karachi and somebody needs to look into that. Being a victim, I can feel how people are getting impatient, the widow urged.

“Today, Faisal Edhi also endorsed this that people are taking bodies without identification.” “Who permitted for this?” she asked. Death and Life are in the hands of ALLAH. All of us have to depart, we all will only take our deeds.”

“Allah-willing he might have fallen to some rooftop; he may have been under some wreckage and we get to find him. But who is responsible for all this?” she asked.

“There must be a person who should be responsible for all this, who must manage all this.” His officers helped him day and night, I can’t thank them enough, I don’t have words,” she said.

Addressing to the COAS she said, “Army chief! your soldiers are not only those who are martyred at borders for saving us. But, every government employee who considers you their Army Chief. We are your force, please help us.”

“Help us in this plight, help Khalid, who has been a shining office he was a future of this country. It is Allah’s will we don’t know where he is. Whether he is alive or not with us, the crisis needs to be managed.”

“My earnest request: Kahlid has served this county diligently; recently in the coronavirus pandemic he worked day and night without caring for his life. I request to look into how to overcome disasters, it is no time to criticise anyone. There must be a proper inquiry; and please provide dead bodies to proper relatives. I have this earnest request, thank you.”