Can being an HR Head, could be that serious job? 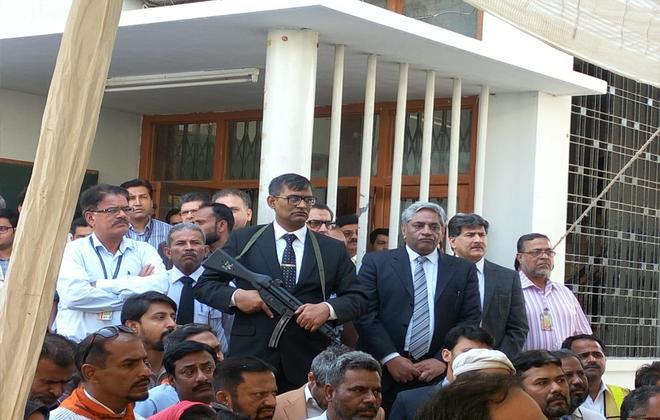 A photo has been making round in social media lately, in which man can be seen holding an automatic weapon in some sort of public gathering.

And it was learnt later that person, holding the gun is the head of HR of PIA holding an automatic weapon as the airline’s CEO addresses staff on Friday. Can being the HR Head, could be that serious job?

As, being reported, PIA’s recently appointed CEO Air Marshal Arshad Malik addresses staffers while a man can be seen holding an automatic weapon.

The photo went viral on social media, as soon as it was learned that the man holding the gun was the airline’s HR and Admin Head Wing Commander Kamran Anjum.

This act has made people furious, many people took to social media expressing their thoughts after seeing this image.

there should be inquiry into this display of weapon by @Official_PIA top official foreign airlines Chief during such interaction, are flanked by beautiful cabin crew and flowers https://t.co/hXf4jdNtaQ

Great people to fly with @Official_PIA
Fixing PIA at gun point. Wing Cdr. Kamran holds a submachine while CEO Air Marshal Arshad Malik addresses PIA Staff.people who were great to fly with at one time need to take a walk into the sunset and let privatization prevail… pic.twitter.com/WRL4QDhCEM

When the HR head of PIA fires you, you go home with a thank you certificate and a bullet in your ass https://t.co/JDFo1hB0qp

Guy carrying the gun in this "meeting" is the head of HR for PIA. This is the sort of energy everyone would "love" to be working with. pic.twitter.com/JSZLPGZ23N

Sir he’s a wing commander and on deputation in PIA as the HR/Admin head! That’s how they’re planning to run a hospitality service!

PIA's CEO and head of HR. I wonder whether PIA employees would like to get fired or fired, by the militigement?

tweet
Share on FacebookShare on TwitterShare on PinterestShare on Reddit
Saman SiddiquiFebruary 1, 2019
the authorSaman Siddiqui
Saman Siddiqui, A freelance journalist with a Master’s Degree in Mass Communication and MS in Peace and Conflict Studies. Associated with the media industry since 2006. Experience in various capacities including Program Host, Researcher, News Producer, Documentary Making, Voice Over, Content Writing Copy Editing, and Blogging, and currently associated with OyeYeah since 2018, working as an Editor.
All posts bySaman Siddiqui