He also directed the authority concerned to maintain the quality of food being served at shelter homes and through mobile trucks. 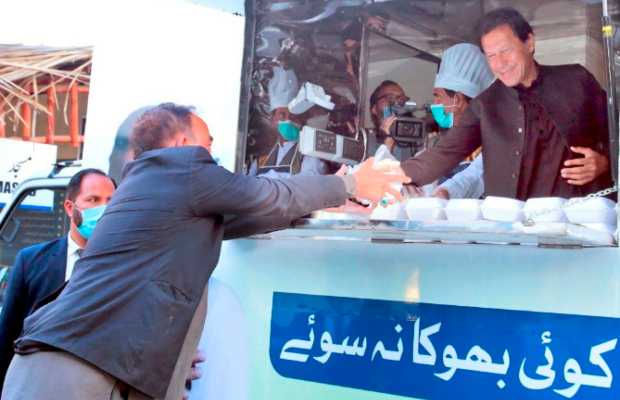 Under the programme, mobile vans would visit different areas of major cities to feed poor and underprivileged people.

The initiative will soon be expanded to other cities of the country.

Addressing the launching ceremony in Islamabad, PM Imran Khan said that the ‘No one Sleeps Hungry’ Programme is a step towards a welfare state, which always cares for its poor and deserving people. He added that there were many areas in Pakistan where people go to bed hungry.

“I always feel happy to see deserving people being given shelter and food with honour and dignity at various Panahgahs established across Pakistan.”

“Most people [in Pakistan] are on daily wages and when they don’t get their wages, they have to sleep empty stomach,” he added.

The government is starting the programme in Islamabad at the moment but it would soon reach other cities of the country. “One day, these vans would feed people across Pakistan.”

He also directed the authority concerned to maintain the quality of food being served at shelter homes and through mobile trucks.

In his address, the premier further maintained that the government was providing health insurance to millions of people in Khyber-Pakhtunkhwa (K-P), Punjab, and Gilgit-Baltistan (G-B), adding that now the people of these regions can avail themselves medical facilities in any hospital public or private.

PM Imran Khan also announced to launch a subsidy programme to be launched by June this year under which money will directly be transferred to the accounts of 30 million families so that they keep up with the rising inflation and afford basic commodities.

He said that it would enable the poor and deserving people to procure kitchen items.

“Farmers will also receive direct subsidies to pay for fertilisers. It will be a revolutionary step,” the premier further said.

Special Assistant on Poverty Alleviation Dr. Sania Nishtar gave a briefing on the newly launched initiative. she said that the mobile trucks will deliver food at designated points in the twin cities.

“The programme is being executed with the cooperation of Pakistan Baitul Maal,” she added.

While the Managing Director Pakistan Baitul Maal Aun Abbas Bappi said that hospitals and bus stops are especially targeted so that quality meals can be served to deserving people.

tweet
Share on FacebookShare on TwitterShare on PinterestShare on Reddit
Saman SiddiquiMarch 10, 2021
the authorSaman Siddiqui
Saman Siddiqui, A freelance journalist with a Master’s Degree in Mass Communication and MS in Peace and Conflict Studies. Associated with the media industry since 2006. Experience in various capacities including Program Host, Researcher, News Producer, Documentary Making, Voice Over, Content Writing Copy Editing, and Blogging, and currently associated with OyeYeah since 2018, working as an Editor.
All posts bySaman Siddiqui