PM Imran Khan will be seeking for a comprehension strategy for better protection of student rights.

This comes after as thousands of students took to streets holding Student March on Friday,  demanding the reinstatement of student unions, demilitarisation of campuses and a 10 percent increase in the education budget across various cities, nationwide.

The premier further stressed, “We will establish a comprehensive & enforceable code of conduct, learning from the best practices in internationally renowned universities, so that we can restore & enable student unions to play their part in positively grooming our youth as future leaders of the country”. 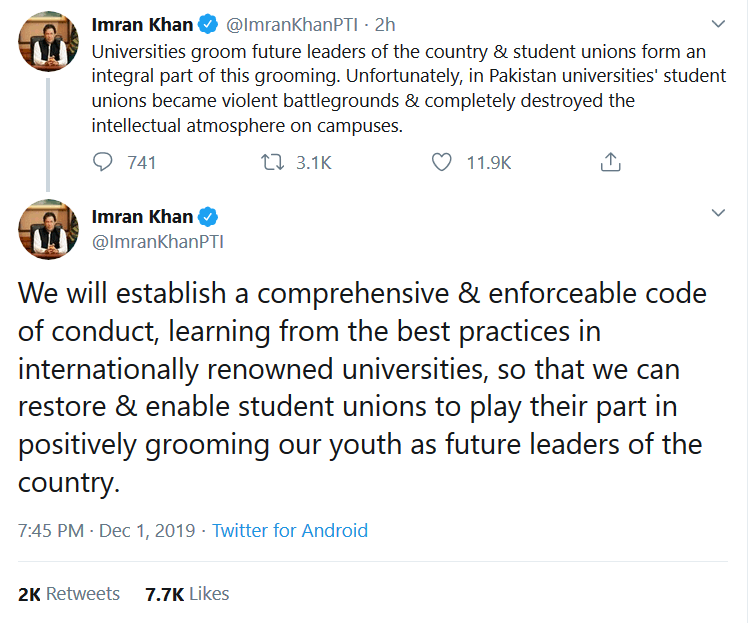 Meanwhile, Special Assistant to PM on Information and Broadcasting Firdous Ashiq Awan on Sunday has said that Prime Minister Imran Khan had directed the center and provinces to formulate a comprehensive strategy to protect the rights of students and resolve their problems on an immediate basis.

In a series of tweets, Awan said, “The realisation of dreams of the youth is a central mission of Prime Minister Imran Khan”.

“Our students are the force which will bring new ideas, vision and dynamic leadership in the coming times. The youth of this country is prepared to meet any challenge,” she added.

Earlier, Federal Minister for Science and Technology Fawad Chaudhry also announced his support for the restoration of student unions across the country.

Fawad Chaudhry shared his thoughts via a tweet saying, “I fully support the restoration of student unions as ban on student unions is anti-democratic”.