“Businesses are closed and the economy is falling because of the COVID-19 pandemic and the government has pushed petrol beyond the purchasing power of the masses,” former PM Abbasi said. 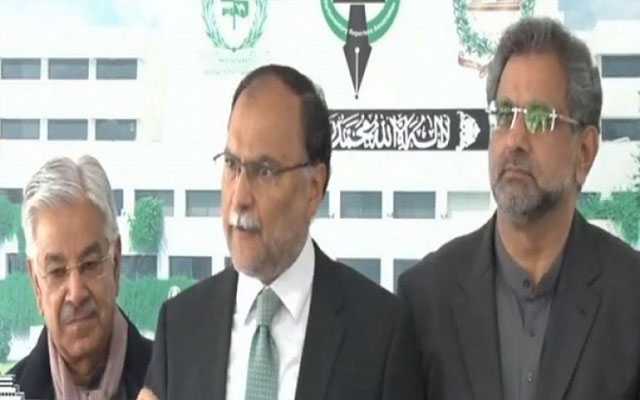 The leaders of Pakistan Muslim League-Nawaz (PML-N) have called for the resignation of Prime Minister Imran Khan over hike in petroleum prices.

In a press conference in Islamabad on Saturday, the PML-N leaders Shahid Khaqan Abbasi, Khawaja Asif and Ahsan Iqbal strongly criticised the incumbent government for the hike saying that if the prime Minister was given more time and his policies continued, then the country would suffer an irreparable loss.

“Businesses are closed and the economy is falling because of the COVID-19 pandemic and the government has pushed petrol beyond the purchasing power of the masses,” former PM Abbasi said.

The ex- premier hinted at supporting any constitutional move the opposition aimed at replacing the Prime Minister Imran Khan.

Meanwhile, PML-N leader Khawaja Asif said the whole country was suffering because of the ego of the prime minister.

Ahsan Iqbal, while criticizing said that the PTI government is being blackmailed by mafias since the day it took over the country, adding that we’re waiting to see what action the National Accountability Bureau (NAB) takes on this “criminal negligence”.

The PML-N leaders pointed out that the price of petrol was never increased by 34% in the country’s history.

Note that the Pakistan Tehreek-e-Insaf government has increased the petrol price by nearly Rs26 on Friday.