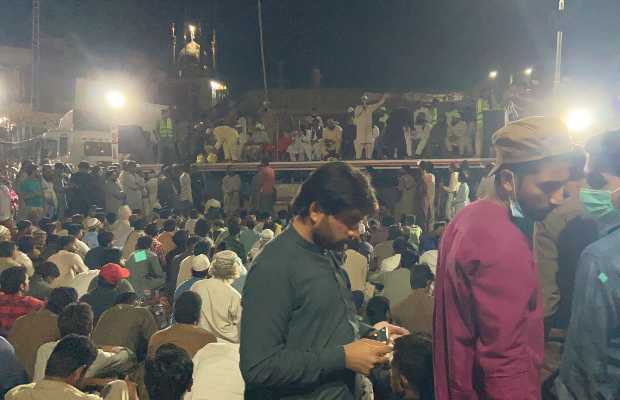 The chief of Tehreek-e-Labbaik Pakistan, Saad Hussain Rizvi was detained on Monday afternoon after Zuhar prayer.

According to sources, Lahore police took Saad Rizvi into custody as a “pre-emptive measure” ahead of TLP’s April 20 deadline.

As per the news source, no first information report (FIR) against the TLP central emir has been registered so far.

In a statement, the TLP naib emir said the party’s workers had “paralyzed the entire country”, adding that Lahore had been sealed from 24 points.

He further added the road link between Sindh and Balochistan had been cut off, while important roads in Khyber Pakhtunkhwa, as well as Islamabad’s Faizabad Interchange, were blocked.

“Only Allama Saad Hussain Rizvi will be able to order the sit-ins to be ended,” he added.

Citizens across the country had to bear traffic jams on main routes due to protests that have paralyzed the locomotion.

The entry points of the cities including Lahore, Islamabad, and Rawalpindi were also closed for traffic, leading to more problems for citizens.

Sections of the Islamabad-Lahore Motorway and Lahore-Abdul Hakim Motorway have been closed, while the National Highway (N-5) was closed at 20 locations in different zones due to protests at several points. 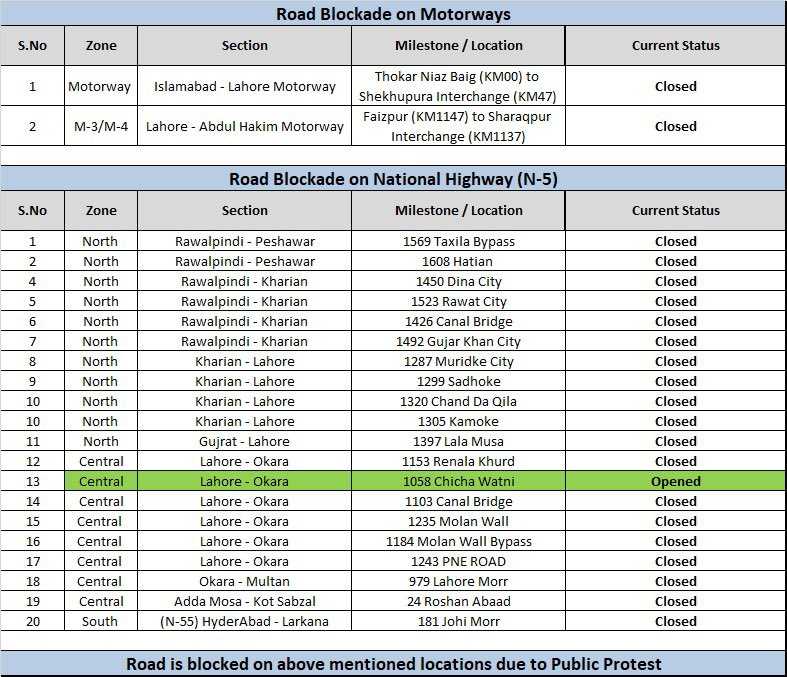 Protests are being held on numerous roads and in many areas of the metropolis including Baldia No. 4 Hub River Road, Northern Bypass, Orangi Town No. 5, Jinnah Bridge (traffic blocked from ICI towards Jinnah Bridge), and Star Gate.

As being reported, at least one police constable was injured in Orangi Town No. 5 after TLP supporters protesting the arrest of some TLP workers hurled stones on police.

During a similar protest at Bakra Hotel near Tower, two police constables were injured during stone-pelting by TLP workers.

In Lahore, several roads and entry and exit points were closed due to TLP protests.

Following areas of Lahore are reported to have been affected due to  protests:

In the capital, TLP workers forcefully blocked Uthal Chowk at the Bhara Kahu area. The chowk’s closure led to a complete halt in the flow of traffic coming from Murree.

The protests also spread to highways and motorways. Sections of the Islamabad-Lahore Motorway and Lahore-Abdul Hakim Motorway were closed, while the National Highway (N-5) was closed at 20 locations in different zones.

Due to TLP’s demonstrations, the road link between Multan and different cities of southern Punjab was cut off. Security was beefed up across Multan in view of the situation.

TLP workers also staged a demonstration on the Bahawalpur Bypass due to which long queues of vehicles were witnessed.

Protests were also reported in Basti Malook, Ada Lar, Khanwel, and area others.