Muhammad Abbas Jafri, model turned politician, who is an elected MPA from Karachi PS 125 on PTI’s ticket, has been served with a show-cause notice ‘against violation of the party discipline’. And has been directed to submit a written response in his defense within the next three days.

Furthermore, Jafri has also been barred from speaking or commenting on media (Electronic, Print, and Social) against party members and policy decisions of the party.

According to the notification issued by PTI, Jafri was involved in an ‘unfortunate incident’ in Karachi’s Central District that concerned the ‘internal affairs of the party’.

Read more: Model-turned-politician Abbas Jaffery vows to “give back to the community”

“You are directed to submit a written explanation within the next three days as to why your case should not be referred to the regional Standing Committee on Accountability and Discipline for further appropriate constitutional action,” the notice further reads. 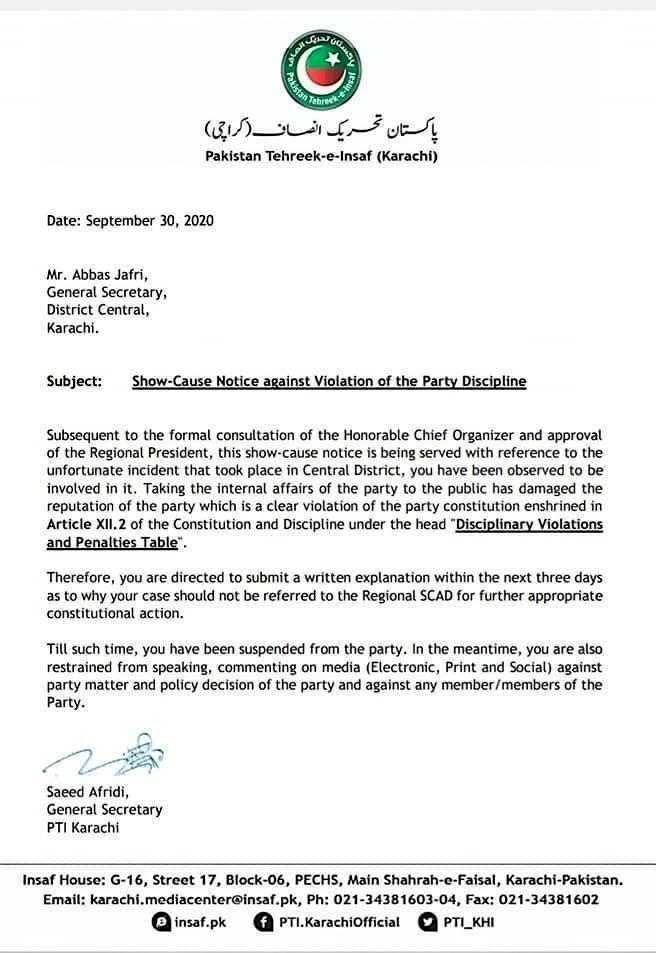 This development comes after, Pakistan Tehreek-e-Insaf (PTI) MNA Najeeb Haroon’s coordinator, Azam Khan, was severely injured during a violent clash between two factions of the party at the Sharae Noor Jahan police station in the wee hours of Wednesday.

According to the police, PTI MPA Abbas Jafri had filed a complaint against a party worker Umar Daraz, who had been detained for questioning. This provoked up several party workers, who gathered outside the police station. Soon after, two opposing groups began attacking each other, police-related. As a result, Khan was injured, while plant pots and the station reporting room’s window were broken, they added.