The Pakistan Meteorological Department has predicted more rain on Tuesday. 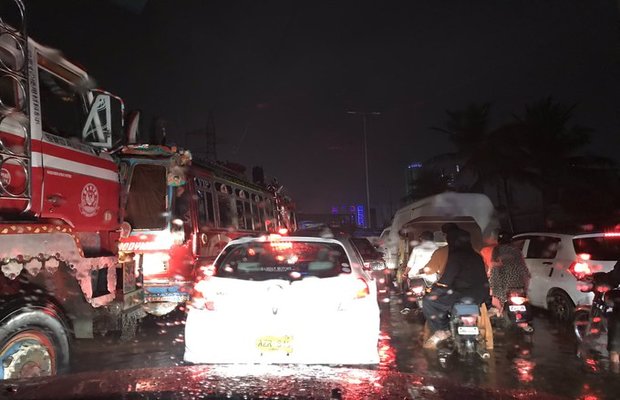 Karachi wala suffered a massive traffic jam on Monday evening. The traffic in the metropolis came to standstill, as various roads were clogged after the new spell of monsoon rains on Monday.

The Jam Sadiq Bridge and KPT flyover became a nightmare for many people after the EBM Causeway was flooded. The route from Baloch Colony to Korangi Brookes Chowrangi was also closed.

People traveling in buses, rickshaws, and taxis started to abandon the vehicles on the roads, making the situation worse.

People started to share their ordeals on social media after being stuck in traffic for several hours.

Took me 6 hours to get home from Korangi today, which usually takes me 15 minutes. All because the city got a little wet.

Korangi road stuck from akhtar colony to korangi and malir, people are stuck into cars since 6pm. Avoid till clear. #Karachi #KarachiUpdate #Karachirain

The news somehow managed to reach the CM Sindh who finally took notice of the metropolis situation.

The Sindh CM’s media spokesperson said that Mr. Shah took notice of the distressing traffic blockages earlier in the day and, therefore has issued the directives to the city’s traffic police.

CM has further advised the district police to help the traffic police in resuming the traffic in Karachi, the spokesperson added.

The Meteorological Department has forecast thunder rain weather for the city for the next 24 hours.