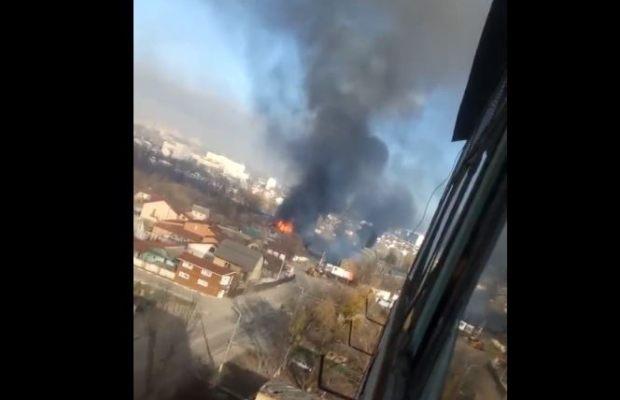 Russian troops have been ordered to advance in Ukraine!

The conflict has entered the fourth day with Moscow ordering its troops to advance in Ukraine “from all directions”.

The war rages on in Kharkiv and in other regions of Ukraine, the fighting is expected to intensify in the capital.

Reports of street fighting are emerging as armed clashes erupted on Sunday morning.

Fighting rages in Kharkiv, the city administration in Kyiv, 400 kilometers (250 miles) to the west, said the capital remained under the control of Ukrainian forces despite clashes with “sabotage groups”.

The Russian defence ministry on Sunday has claimed that its troops had besieged the southern Ukrainian city of Kherson and the city of Berdyansk in the southeast.

“Over the past 24 hours, the cities of Kherson and Berdyansk have been completely blocked by the Russian armed forces,” defence ministry spokesman Igor Konashenkov said in a statement.

defence ministry spokesman added that Russian troops had also taken control of Genichesk, a port city along the Sea of Azov, and an airfield near Kherson.

As of Sunday, the Russian army said it had destroyed 975 military facilities in Ukraine and shot down eight fighter jets, seven helicopters, and 11 drones.

He also claimed that on Saturday forces of an air defense missile regiment near Kharkiv “voluntarily” put down their arms, adding that more than 470 Ukrainian servicemen had been detained.

On the other hand, Ukraine insists on inflicting heavy casualties on the Kremlin’s forces.