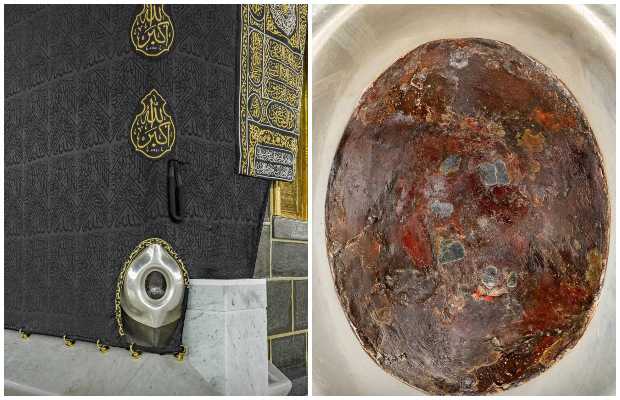 The newly released images of the Stone from Heaven have left the Muslims all across the globe mesmerized.

According to Muslim belief, the famous Black Stone descended directly from heaven and was given to the Prophet Abraham by the angel Gabriel.

Hajar e Aswad is placed in a frame made of pure silver and is located in the corner of the Kaaba, about a meter and a half from the ground.

The General Presidency for the Affairs of the Two Holy Mosques captured the details on the Black Stone – known as Hajar Aswad in Arabic, with a new technique that uses stacked panoramic focus.

As per the details revealed by the authorities, the stone was photographed for a total of seven hours to produce a single image with the highest resolution.

The photographs are up to 49,000 megapixels resolutions and it took 50 hours to develop them.

The Black Stone is believed to be originally a single piece of rock but today consists of several pieces that have been cemented together. They are surrounded by a silver frame which is fastened by silver nails to the Kaaba’s outer wall.

The stone was venerated at the Kaaba in pre-Islamic pagan times. According to Islamic tradition, it was set intact into the Kaaba’s wall by Prophet Muhammad in 605 CE, five years before His first revelation.

Its physical appearance is that of a fragmented dark rock, polished smooth by the hands of pilgrims. Islamic tradition holds that it fell from heaven as a guide for Adam and Eve to build an altar. It has often been described as a meteorite.

There is the history behind the placement of the Black Stone where it is situated today.

A story found in Ibn Ishaq’s Sirah Rasul Allah reveals how the clans of Mecca renovated the Kaaba following a major fire that had partly destroyed the structure. The Black Stone had been temporarily removed to facilitate the rebuilding work. The clans could not agree on which one of them should have the honour of setting the Black Stone back in its place.

They decided to wait for the next man to come through the gate and ask him to make the decision. That person was 35-year-old Prophet Muhammad, five years before his prophethood.

Then, Prophet Muhammad P.B.U.H set the stone in place, that satisfied the honour of all of the Mecca clans.

After the historic Conquest of Mecca in 630, Prophet Muhammad is said to have ridden around the Kaaba seven times on his camel, touching the Black Stone with his stick in a gesture of reverence.

Muslim pilgrims circle the Kaaba as a part of the tawaf ritual during the Hajj and Umrah and many try to stop to kiss the Black Stone, emulating the kiss that Islamic tradition records that it received from the Holy  Muhammad P.B.U.H.

Hajar e Aswad has suffered repeated desecrations and damage over the period of time.

According to historians, the Black stone is said to have been struck and smashed to pieces by a stone fired from a catapult during the Umayyad Caliphate’s siege of Mecca in 683. The pieces were rejoined by Abd Allah ibn al-Zubayr using a silver ligament.

However, it was stolen by the Qarmatians in January 930. The historian al-Juwayni narrates that the Balck Stone was returned twenty-three years later, in 952. The Qarmatians held the Black Stone for ransom and forced the Abbasids to pay a huge sum for its return.

In the 11th century, a man allegedly sent by the Fatimid caliph al-Hakim bi-Amr Allah attempted to smash the Black Stone but was killed on the spot, having caused only slight damage.