Spy Cameras Found Inside Booth Ahead of Senate Chairman Polls

The discovery of Spy cameras at the polling booth cause outrage in the house ahead of the Senate chief election. 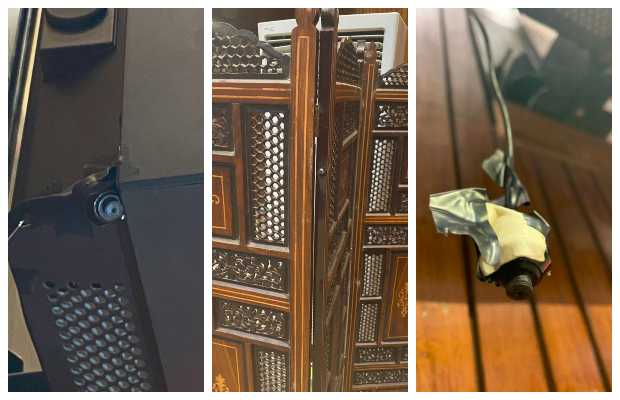 ‘Spy cameras’ were discovered in polling booth ahead of Senate chairman polls on Friday. The discovery brought a new controversy to light after senate vote-selling allegations.

For Senate chairman. The opposition alliance has fielded Yousaf Raza Gilani as the joint candidate while the government has nominated Sadiq Sanjrani.

Myself and Dr Musadik found spy cameras right over the polling booth!!!! pic.twitter.com/aqRGFRYFbq

What a freaking joke
The senate polling booth has secret /hidden cameras installed
SO MUCH FOR DEMOCRACY pic.twitter.com/S7OapMhZtn

The discovery of Spy cameras at the polling booth cause outrage in the house ahead of the Senate chief election.

PPP’s Raza Rabbani said that “This is against Article 226 of the Constitution,” he said, as the house echoed with “shame, shame”.

While the protest at the Senate led the presiding officer to issue directives for changing the polling booth.

“The current polling booth should be removed, another should be set up afresh,” he said.

Federal Minister for Information Shibli Faraz has said that spy cameras have been placed inside Senate polling booths by the opposition leaders themselves to stage a drama.

Addressing a presser in Islamabad on Friday, Faraz said that the opposition created an impression that the cameras were deployed by the government.

“We will carry out an in-depth investigation of the incident,” he said.

“We all know what people were employed inside the building during their [the PPP’s] tenure. We will expose the agents of PPP and PML-N,” the federal minister added.

While Federal Minister for Science and Technology Fawad Chaudhry responding to the Spy Camera controversy said that those cameras were “in all likelihood CCTV” cameras and not spy cameras.

This is one example of Spy Camera the camera can be fitted in a head of nail even,detection of such cameras is impossible, in all likelihood CCTV Camera cable is misunderstood as spy camera pic.twitter.com/KPu8a2RCpA

It may be recalled that during the Senate session, the opposition strongly protested against the installation of cameras in the polling booth, and the booth was uprooted and placed on the seat of the Secretary Senate after which the Presiding Officer Muzaffar Hussain Shah ordered to re-establish the polling booth.

The Senate session has been adjourned till 3 pm.