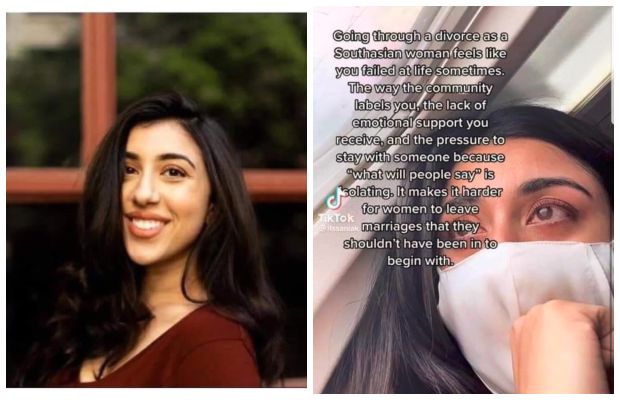 29-year-old Pakistani American girl  SaniaKhan was murdered by her ex-husband in Chicago.

Sania used to make TikTok videos about the stigma of divorce in South Asian communities.

Khan was a professional photographer who moved to Chicago from Chattanooga in June 2021.

Before she was shot, Chicago-based photographer Sania Khan posted videos on TikTok about how difficult it was to divorce as a South Asian woman.

As reported, the officers found Khan, 29, unresponsive near the door with a gunshot wound to the back of the head and blood on her face.

While, Raheel Ahmed, 36,  was discovered in a bedroom with a head injury. A handgun was found in his hand and a suicide note was discovered nearby, according to the report.

According to Chicago police and the medical examiner’s office, Sania Khan was pronounced dead at the scene.

A divorced daughter is better than a dead daughter.

Support your daughters/sisters if they are suffering. Show up for them in need 🙏🏼

Inna Lilahe Wa Inna Elahi Rajioon…
Pls say a prayer for #SaniaKhan, a Pakistani American who was shot dead by her ex husband in Chicago. pic.twitter.com/x2RKfRFfk0

Sania used to make TikTok videos about the stigma of divorce in South Asian communities.

Whether its in the US or at home, honour killings by Pakistani men have bowed all our heads in shame. pic.twitter.com/2WV9we8k6F

RIP #SaniaKhan! She decided to end an abusive marriage but her ex-husband killed her.
Sadly she didn’t have support from her family or the society. Desi people care more about their reputation than their child’s happiness.
A divorced daughter is better than a dead daughter!💔 pic.twitter.com/qXRZ8xUQHz

Crime is crime, without looking at criminal's religion, cast or nationality. #SaniaKhan pic.twitter.com/mwdMqRfogv

This is what is problematic with our society. We prefer a dead daughter than a happy divorced one!! Last year it was #NoorMukadam and this year #saniakhan. There are many more whose news didn't make to the world. pic.twitter.com/UwlEWVWrrh