Punjab Chief Minister Sardar Usman Bazdar took notice of the incident and ordered an inquiry into the blast. 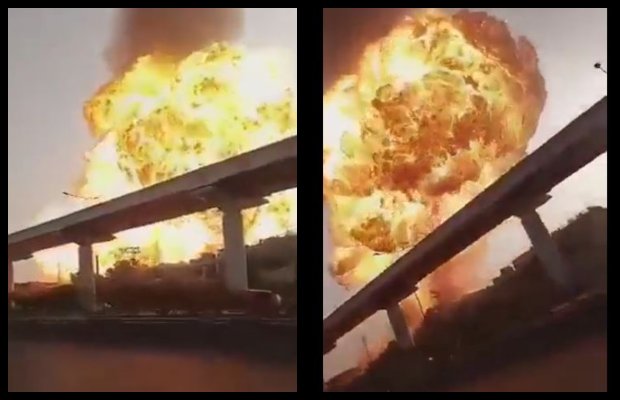 A boiler exploded in a juice factory situated on Multan Road in Lahore on Thursday afternoon.

The skyrocketing blazes from the explosion were witnessed for several kilometers distance.

Two people were killed and several injured in the blaze. The victims of the incident have been identified as Yaseen and Shabbir.

According to eyewitnesses, the boiler exploded and damaged nearby houses.

Residents of the area told reporters that the boiler of the factory was installed against the wall in front of the houses.

Complaints were made several times but no hearing was held. Government High School Cream Block is located near the factory.

A number of road passers captured the blazing factory fire and the video clips are now doing rounds on social media as well. CCTV footage of the blast also surfaced.

A major accident has been reported in Lahore, Pakistan. There's a blast from the boiler burst there. The incident took place at a factory on Multan Road in Lahore. Several people are estimated to have been killed in the incident.#Lahore #LahoreBlast #lahoreincident #Pakistan pic.twitter.com/MCS7LKCj5j

Blast in Lahore proably due to boiler in a factory at Multan road 🙏🏻 #LahoreBlast pic.twitter.com/PZEyBP3FDz

On the other hand, Punjab Chief Minister Sardar Usman Bazdar took notice of the incident and ordered an inquiry into the blast.  He has directed  Commissioner Lahore Division and Secretary Labor to submit a report.

The Punjab Chief Minister has issued orders to take action by identifying the causes of the fire and those responsible for the negligence.

The Punjab Chief Minister expressed his sorrow over the death of the laborer and extended his heartfelt sympathy and condolences to the family of the deceased laborer.