Social media has been in an uproar over the incident of a girl proposing boy and hugging him at the uni campus. 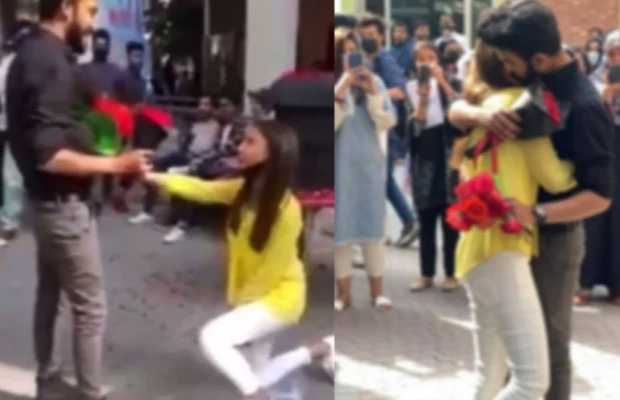 University of Lahore’s expelled student couple has tied the knot, as per the latest update.

It was a week ago when two students of UOL, Shehryar Ahmed Rana, and Hadiqa were expelled from the varsity after their proposal video went viral on social media.

The couple has confirmed their marriage news on their respective social media accounts.

The viral video started a new debate on social media and the internet was left divided.

Many social media users came out criticizing the students for insulting the moral values of society.

On the other hand, many regarded it as only a case of love and demanded “Live and let the others live in peace.”

Meanwhile, there has been a lot of hues and cries for expelling them from the university.

The Federal Ministry of Human Rights has asked the University of Lahore to re-admit the two students who were expelled for a public proposal on campus, calling the university’s move an ‘overreaction’ and ‘moral policing.

In a letter to the varsity’s administration, the ministry’s Parliamentary Secretary Lal Chand Malhi wrote, “Both the girl and the boy did not commit such a heinous crime for which they were punished severely and expelled from the university. This would destroy their career and future education opportunities.”

Federal Minister for Science and Technology Fawad Chaudhry also reacted to the news.

The federal minister has appealed to the university administration to reconsider the decision.

Social media has been in an uproar over the incident of a girl proposing boy at the uni campus.

The video clip doing rounds on the internet showed a girl going down on her knees to propose to a boy supposedly her university fellow.