The race between the presidential candidates, Donald Trump and Joe Biden is on knife-edge as vote counting is still going on in various states that will decide the fate of the nominees.

According to the reports, the results from the battleground states that include Arizona, Georgia, Wisconsin, Michigan and Pennsylvania suggest a tight contest between Trump and Biden. So far the primary result shows Joe Biden is ahead with 14 electoral votes against Trump taking 227 electoral votes. Donald Trump, on the other hand, secured 213 electoral votes. 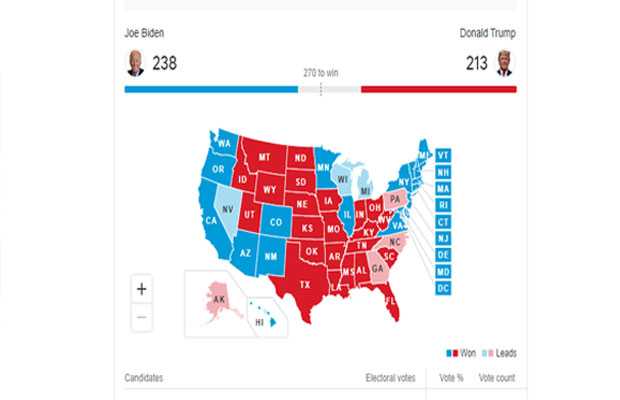 Reports further said that Trump is so far projected to win 23 states, including Texas, Ohio and must-win Florida, having outperformed pollsters’ prediction while Biden could sweep Arizona, but is facing a much tougher fight than expected in Nevada, saying he is “on track to win”.

As per the unofficial primary election result so far shown in updates Trump is ahead in swing states and hoping for a victory from Georgia, North Carolina, Pennsylvania, Florida, Iowa, Ohio and Texas.

While on the other hand Joe Biden took the maximum votes from Michigan, Nevada, Wisconsin, Arizona and New Hampshire.