Mainstream Media Not Allowed to Report? 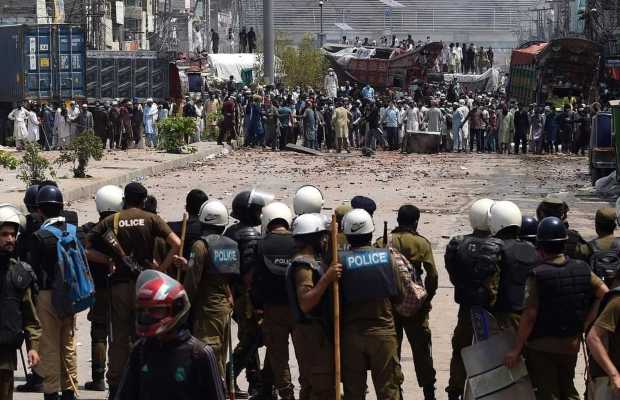 What Happened in Lahore on Sunday? there was no coverage on the mainstream media to share updates with the nation.

However, the Twitter timeline in Pakistan presented a grim and tense situation showing images of clashes between security forces and the banned outfit supporters.

According to the Punjab police, “Today in the early morning, miscreants attacked Nawankot Police Station where Rangers and Police officers were trapped inside the police station and DSP Nawankot kidnapped and taken to the Markaz. At least one oil tanker with 50,000 litres of petrol has been taken by the miscreants to the markaz.”

“Police and Rangers pushed them back and took back the possession of the police station,” the statement said, adding that police did not plan or conduct any operation against the mosque or the madressah.

“The action, if any, was in self-defense and to protect public property.”

A number of video clips are also circulating on social media showing at least 2 of TLP’s supporters’ dead bodies. The voice in the video clip claims that they were killed by police’s direct firing. However, the clips are not being attached in this news bit because of unverified claims and graphic content nature.

As being reported, the operation that was launched against the TLP activists earlier in the day has been temporarily halted at the moment.

Earlier in the day Punjab Chief Minister’s Special Assistant for Information Firdous Ashiq Awan also shared what happened in Lahore today in a series of tweets.

On the other hand,  Minister for Interior Sheikh Rasheed while briefing the press said that no negotiations process is underway with the banned Tehreek-e-Labbaik Pakistan (TLP).

Briefing the journalists about the banned TLP’s blockage of roads and highways across Pakistan, the minister said 191 out of 192 locations across the country cleared from the outlawed organization. “No negotiation process is underway with the TLP,” he added.

“The situation is a bit tense at Yateem Khana Chowk in Lahore where the Jamia Masjid Rahmatul Lil Alameen is located,” he said. “Currently, all roads including the GT Road and the Murree Expressway are open [for traffic],” he said.

“We have been trying to reach a consensus with them for the past two months but they are not ready to compromise on their demands,” Sheikh Rasheed maintained. He also explained that when an organization is proscribed, bank accounts and identity cards of its stakeholders are blocked and their movement is restricted.

“The government will establish its writ. Steps had to be taken for which they were not mentally prepared,” the interior minister added.

The sit-in should be ended immediately, Saad Rizvi’s message to the shura members

By Sunday night a message from the detained TLP Cheif was shared for the shura members and supporters of the now-banned outfit.

Saad Rizvi, head of the banned Tehreek-e-Labeek, in a message addressed to his shura members, said that the sit-in in front of the Rahmat-ul-Alamin Mosque should be ended immediately.

Saad Rizvi conveyed the message that the workers should return to their homes immediately. In his message, the banned TLP chief said that the members of the Shura should surrender to the law.

Hundreds of workers and thousands of people have been humiliated for the last six days because of their stubbornness,” he said.

He further added that the call for protest on April 20 should also be withdrawn.

Meanwhile, the Pakistan Federal Union of Journalists (PFUJ) has strongly condemned the blocking of news coverage of unfortunate developments unfolding in Lahore that have led to riots, loss of lives, and damage to properties, says a press release. 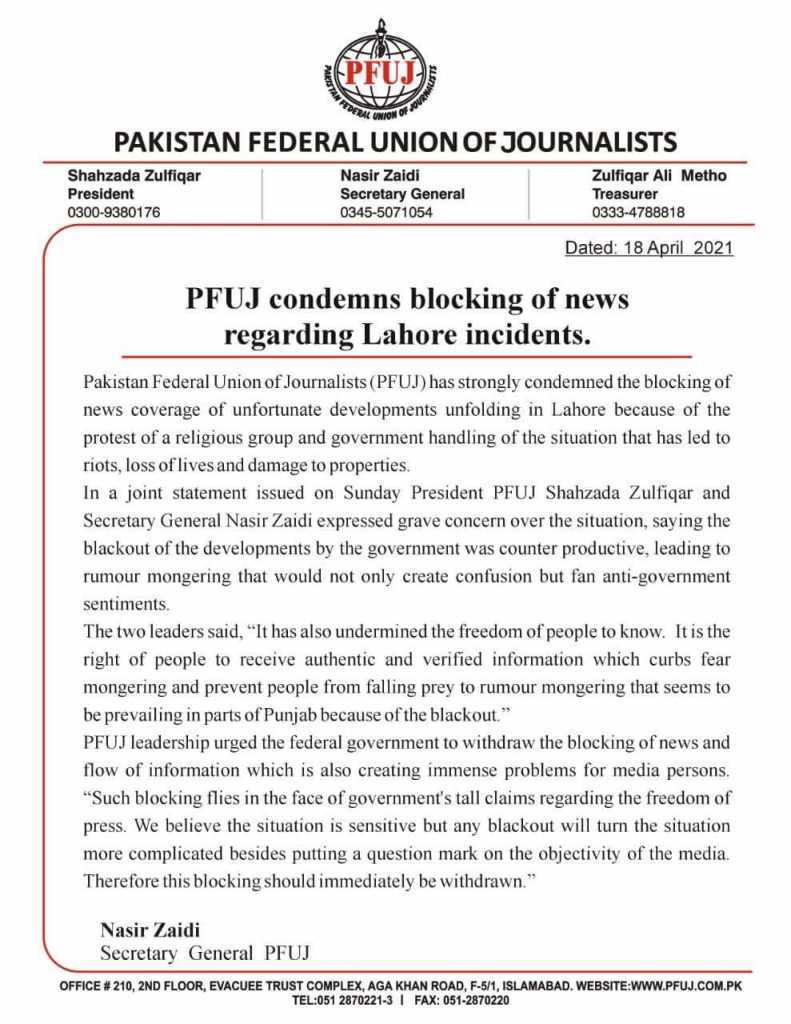 A court inquiry commission should be formed on the situation in Lahore, Siraj-ul-Haq

Ameer of Jamaat-e-Islami Sirajul Haq demanded setting up a judicial commission to investigate the current situation in Lahore.

Addressing a press conference in Lahore, Sirajul Haq said that the intention of the government was not right from the beginning, all political and religious leaders should be taken into confidence.

Siraj-ul-Haq has also called a meeting of the National Solidarity Council and Ulema in Mansura.

Meanwhile, Jamaat-e-Ahl-e-Sunnat leaders Allama Mazhar Saeed Kazmi and Hamid Saeed Kazmi have said that the government did not act wisely.

He added that the international lobby was being pushed forward by pushing Pakistan into a dead end and a conspiracy was being hatched against the national institutions.

tweet
Share on FacebookShare on TwitterShare on PinterestShare on Reddit
Saman SiddiquiApril 18, 2021
the authorSaman Siddiqui
Saman Siddiqui, A freelance journalist with a Master’s Degree in Mass Communication and MS in Peace and Conflict Studies. Associated with the media industry since 2006. Experience in various capacities including Program Host, Researcher, News Producer, Documentary Making, Voice Over, Content Writing Copy Editing, and Blogging, and currently associated with OyeYeah since 2018, working as an Editor.
All posts bySaman Siddiqui