Why Kate and Meghan Stood So Far Apart at the Trooping of Color? 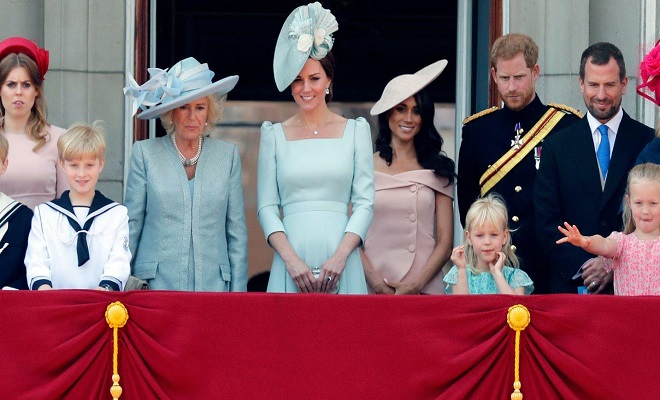 Earlier this week, Queen Elizabeth’s 93rd birthday was celebrated as the Royal family gathered for Trooping of Color Ceremony. While the occasion is momentous enough, this year’s was a little too extraordinary.

Firstly it was because Duchess of Sussex Meghan Markle made a comeback to public eyes first time after the birth of baby Archie in May, and secondly because Prince William and Kate Middleton’s youngest Prince Louis made his debut on the Royal balcony – and he sure as hell made his presence worthwhile by waving to the cameras and public.

Amidst the festivity, one could not help but notice two extreme corners Duchess of Cambridge Kate and Duchess of Sussex Meghan stood at. While Kate along with husband and kids Louis, George and Charlotte took a center stage and extreme frontal position alongside the Queen’s right, Meghan and husband Prince Harry were a little behind at the back of Queen’s left side.

This definitely came off as a surprise to many, but for experts on Royal matters, this placement is neither shocking nor out of the ordinary.

As per the experts, Queen gets to place each individual on the balcony as per her designated rank on the monarchy. In easy words, the spot at the balcony has very little to do with anyone’s preference and more to do with the hierarchy of the Royal family.

It is however possible that Baby Archie – who was deemed too young to attend the Trooping of Color this year – might enjoy a front position as and when he joins the balcony because children are usually preferred to be at the front regardless of their rank.