A war of words has started between sports anchor Zainab and batsman Babar Azam. 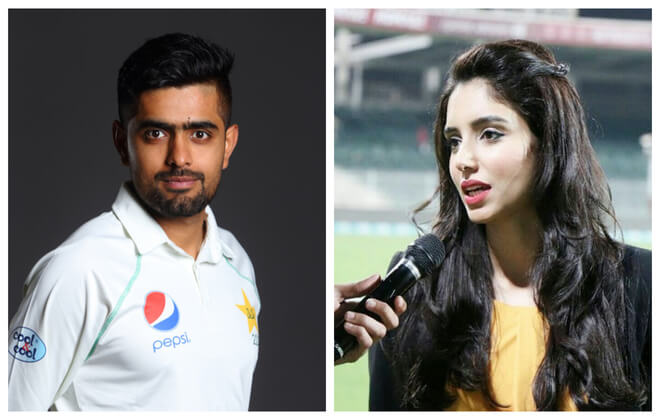 Gritty hundreds from Babar Azam and Haris Sohail kept New Zealand in the field for 167 overs. Everyone came out praising Babar for getting his first hundred in the test match.

But a certain comment made over his hundred made the century maker furious. A war of words has started between sports anchor Zainab and batsman Babar Azam.

She wrote in a tweet, “Well played @babarazam258 – loved how the boys went congratulating Mickey Arthur celebrating his “son’s” century”

Babar Azam was quick to respond to her tweet, though he was a bit harsh in his reply. He replied, “Think before u say something and don’t try to cross ur limits!!!”.

Think before u say something and don’t try to cross ur limits!!! https://t.co/w8I8139OeY

Babar Azam is perceived as one of the favorites of Pakistani coach Micky Arthur, and a obviously coaches’ favorite doesn’t sit well with the rest of the team mates.

It could be presumed, as being a sports journalist Zainab Abbas is aware of the inside story and one can perceive that, ‘Mickey ka beta’ would be an inside joke within the team, which Zainab knows well.

Or maybe Babar Azam is not that good at handling public jokes and satire, and took the tweet in another way.

It will be interesting to see loyalties of Roti Group.

Babr is right in acting hard on this… What if some media blokes take this to another level by creating stories of nepotism between Mickey and Babar, this is not a good way to congratulate anyone by changing his father name, Zainab Abbas should apologize over this… https://t.co/uwFdfTYVjy

I guess Babar Azam tweet was
Pre-Planned & backed by the whole team.