Australian cricketer has been banned by PCB for future editions of the Pakistan Super League. 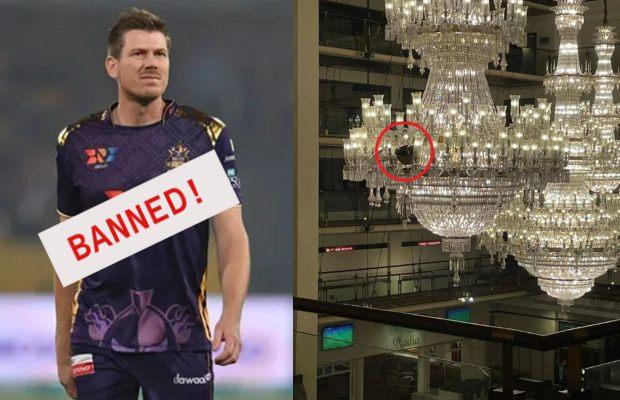 James Faulkner is reported to have damaged hotel property under alcohol influence before departure from Pakistan after alleging PCB of not “honouring contractual agreement” on Saturday.

At the airport, he misbehaved with the security and immigration officers as well. The matter has been escalated to the higher authorities by security officials.

Australian allrounder James Faulkner turned out to be a sour apple of the eye for Pakistan Super League franchise Quetta Gladiators.

Following his conduct and allegations he leveled, the Pakistan Cricket Board (PCB) has banned the player from PSL.

PCB on Saturday has issued a statement refuting James Faulkner‘s allegations of non-payment and announced the decision that he will not be drafted in future editions of the Pakistan Super League.

James Faulkner threw his bat and helmet onto a chandelier after a discussion with a PCB official before leaving #PSL2022 early due to a payment dispute and had to pay for the damages at the time of checkout from PC Lahore.

Well, James Faulkner has brought some drama to the much-anticipated PSL.

Earlier in the day, a tweet from the cricketer left everyone in shock that he has withdrawn from PSL 7.

Taking to Twitter, Faulkner said “I apologize to Pakistani cricket fans. But unfortunately, I had to withdraw from the last two matches and leave @thePSLt20 due to @TheRealPCB not honouring my contractual agreement/payments.”

1/2
I apologise to the Pakistan cricket fans.
But unfortunately I’ve had to withdraw from the last 2 matches and leave the @thePSLt20 due to the @TheRealPCB not honouring my contractual agreement/payments.
I’ve been here the whole duration and they have continued to lie to me.

“It hurts to leave as I wanted to help to get international cricket back in Pakistan as there is so much young talent and the fans are amazing. But the treatment I have received has been a disgrace from the @TheRealPCBand @thePSLt20. I’m sure you all understand my position,” the 31-year-old Faulkner added.

2/2
It hurts to leave as I wanted to help to get international cricket back in Pakistan as there is so much young talent and the fans are amazing.
But the treatment I have received has been a disgrace from the @TheRealPCB and @thePSLt20

I’m sure you all understand my position.

Now comes the real part of the story!

James Faulkner confirmed bank account details in December 2021, 70% payment was transferred to that account by the PCB, then in January he shared another account and demanded money to be transferred there, without refunding the previous transfer, thus demanding double-payment.

PCB following the allegation of the allegations from the Australian cricketer has issued a statement in accordance with the PSL franchise Quetta Gladiators.

“PCB and Quetta are disappointed and dismayed with the reprehensible behavior of Mr. James Faulkner, who was also part of the Abu Dhabi-leg of the HBL Pakistan Super League in 2021, and, along with all participants, has always been treated with the utmost respect, the statement said.

The PCB has provided a brief summary regarding some of the undisputed facts:

According to news reports, drunk James Faulkner had stormed the hotel this morning while Ben Dunk and Samat Patel of Lahore Qalandars were also drunk with him.

According to media reports, screams kept coming from James Faulkner’s room in the morning, and at 4.30 am they started breaking into the room while all the players came out due to screams and noise.

James Faulkner came out of the room, hit his helmet and bat on the hotel chandelier, picked up his luggage, and started throwing it down in the lobby. ۔

Later, upon arrival at the Lahore airport for departure, he also misbehaved with the security staff, which was reported to the higher authorities.

tweet
Share on FacebookShare on TwitterShare on PinterestShare on Reddit
Saman SiddiquiFebruary 19, 2022
the authorSaman Siddiqui
Saman Siddiqui, A freelance journalist with a Master’s Degree in Mass Communication and MS in Peace and Conflict Studies. Associated with the media industry since 2006. Experience in various capacities including Program Host, Researcher, News Producer, Documentary Making, Voice Over, Content Writing Copy Editing, and Blogging, and currently associated with OyeYeah since 2018, working as an Editor.
All posts bySaman Siddiqui