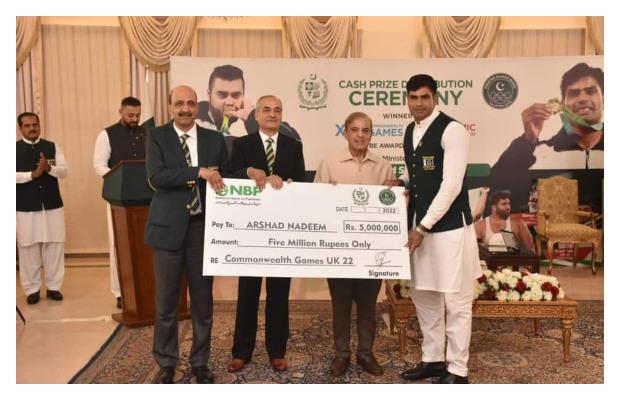 PM asking athletes to aim for ‘platinum medals’, has left Twitter wondering what was all that about.

Seems like Prime Minister Shehbaz Sharif has invented a new category of medals for the athletes as he met the winners of the Commonwealth Games (CWG) 2022 and the Islamic Solidarity Games at the PM House a day ago in Islamabad, where athletes were also awarded cash prizes.

Pakistani medalist athletes including Altaf-ur-Rehman, Nooh But, and Arshad Nadeem were also in attendance at the ceremony.

PM’s remarks have left some Tweeps in frenzy!

For those unserved, here is why Platinum Medal trending on the Twitter timeline:

What is a platinum medal and what athlete needs to do to get this medal?pic.twitter.com/34iTp8g1uT

Now winning a platinum medal will be something no one has ever achieved before. https://t.co/m80LwLu3hQ

Shahbaz Speed has conceived Platinum medal idea in history of sports. All world sports organisation are really thankful for his visionary idea! https://t.co/CKc7rEmbcg

Lol. There is no platinum medal dear PM sb. https://t.co/KdaMolgFL3

This man keep proving us entertainment. After his recommendation of Platinum medal the Olympic association has decided to order these for the next olympic games 😀 😄 pic.twitter.com/yBdqgw7akV