Fawad Alam scored yet another hundred 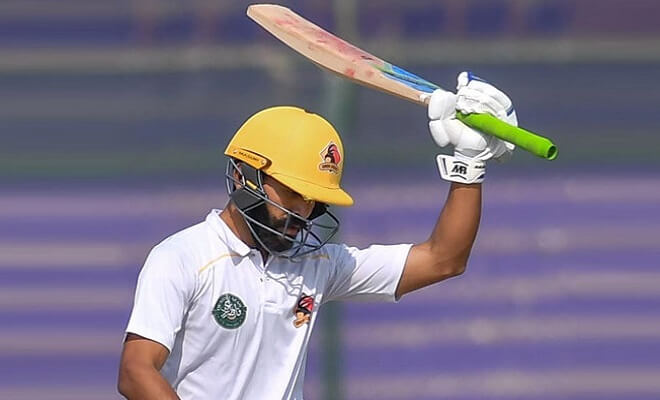 Northern’s aggressive declaration bore fruit as they defeated their rivals for the spot in the final, Khyber Pakhtunkhwa by 39 runs. The victory ensured that they jumped ahead of KP to 130 points and are all set to take on Central Punjab in the showpiece final. The two other matches ended in high scoring draws, with Fawad Alam once again scoring a ton.

In the bottom of the table clash, Balochistan took on Sindh. Sindh has been struggling with their bowler’s fitness issues and it showed once again. Sohail Khan and Mir Hamza were able to pick both openers early. However, the next three batsmen all scored hundreds to take the Balochistan side to 471/9. Imran Farhat top scored with 137. Akbar ur Rehman and all-rounder Amad Butt also scored 100s. Sohail and Hamza picked up three and four wickets respectively. In response, Khurram Manzoor finally showed some form and scored a 100. The victorious Emerging Team captain Saud Shakeel celebrated his return with a 151, while Fawad Alam scored yet another 100. Taj Wali and Jalat Khan picked up three wickets each. Balochistan in their 3rd innings were not under any pressure as Sindh bowled primarily with part-timers. Imran Butt duly collected another century. Sindh escaped the agony of finishing bottom of the table, as Balochistan finished last.

The Punjab derby was another high scoring affair as Central Punjab posted 597/9, batting out any chance of being caught on the points table. Ahmed Shehzad, Abdullah Shafique (on debut) and Usman Salahuddin, all scored hundreds. For Southern Punjab off-spinner Agha Salman picked up three wickets. In response, Southern Punjab were bowled out for 392. Zeeshan Ashraf and Agha Salman both scoring centuries. Off-spinner Bilal Asif picked up a five-wicket haul. In the 3rd innings, Salman Butt and Ahmed Shehzad cashed in, scoring hundreds.

The match with real interest was between KP and Northern, with the winner likely to take the place in the final against CP. Northern were 3rd in the table with all to do. However, they went with an aggressive approach, while KP tried to hang on to their position. On a flat wicket, they invited Northern to bat 1st, included an extra batsman, put defensive fields and continued bowling with the old ball to curb the flow of runs. Northern took advantage scoring 411/8 on the back of a ton by Sarmad Bhatti. For KP, Sajid Khan was impressive once again picking up four wickets. In response, they were bowled out for 306, as Rehan Afridi was left stranded on 95. Pacer Waqar Ahmed produced an excellent spell to get six KP wickets. Zeeshan Malik helped Northern reach 139/6 in quick time with a half-century, as KP were set a target of 244 with a day and a little under an hour to play.

Captain Fakhar Zaman played a reckless shot and was caught at deep mid-wicket, with his team trying to play out the day. Despite fifties from Israrullah and Zohaib Khan, KP could only reach 205. Junaid Khan survived for a while but then played a wild slog and was caught by a diving Umer Amin. Top wicket-taker of the tournament, Nauman Ali, picked up four wickets.

The final will be played in Karachi from the 9th of December.