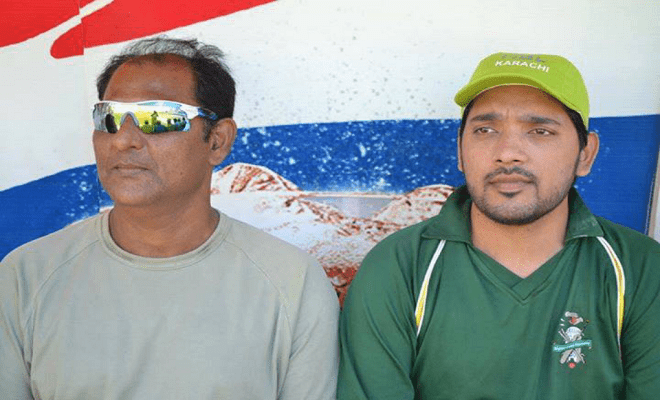 Before Shoaib Akhtar started hurling missiles, ages before Shaun Tait ran in like a train with a similar deceptive technique, there was Jeff Thomson with a slingy action from hell.

Quick as lightning, a complete freak of nature, Thommo as he was affectionately called had one of the wackiest bowling actions you would ever see. He ran in (as Wasim bhai would say) but right at the point of delivery, he would stutter, his shoulders and hands, move almost backwards and then unleash hell hath no fury. His load up is where that extra pace came from. It was as if he pushed himself back and then cannoned the ball towards the batsman.

You are moving forward rapidly, then to suddenly to push your shoulder back, it seemed an unnatural act. Almost an impossible thing to do. But in the narrow lanes of Shah Faisal Colony, Karachi, a young bowler somehow tried this action. Pakistan’s answer to Jeff Thomson was Atiq ur Rehman.

I had read about him before in newspapers and the odd mention in a book or two. But recently Rashid Latif and Doc Nauman did a wonderful interview with him in Caught Behind. So I thought it would be good to look at his story in greater detail (and in text).

Atiq ur Rehman’s maternal uncle (mamu) was a 1st class cricketer and later became an umpire. To bachon per zulm, mamu used to ask his bhatejays to bowl him out on a shortened pitch. Everyone struggled for hours, so the young chap tried this new slingy action, just to get his mamu out.

In the interview, Atiq ur Rehman claimed that he hadn’t seen Thompson bowl. Very rarely did they show matches on TV, so it was just an instinct he tried to follow. For mamu two things stood out, the sheer pace and awkward bounce of a length. They worked together to perfect it. In quick time, word travelled about this snappy pace bowler. He became a terror in Karachi’s cricketing circles. Especially on cement wickets of Karachi, he was hurting batsmen left, right and centre.

So much so, when Saeed Anwar was just starting out, his first introduction to Karachi cricket circles was as the batsman who advanced down the wicket and hit a six against Atiq bhai. Such was his standing. At one point in his career, the Karachi Cricket Association banned him from bowling on cement wickets as he was hurting too many batsmen with bouncers.

The young pacer went for a U-19 tour to Sri Lanka. In one of the matches, three Sri Lankan batsmen ended up in the hospital all thanks to some vicious bouncers. Mohsin Khan the Pakistan opener and a friend of Imran Khan saw him bowl in a club match. Took him to Pakistan camp. There he initially bowled to Javed Miandad. The story goes that Miandad was in great difficulty but negotiated it with courage. Then came Zaheer Abbas.

The right-arm pacer bowled one bouncer to him, which he just evaded. Then came another brutal one.

“Are you trying to kill me” he shouted…

Javed Miandad then signed him up for Habib Bank.

Imran Khan, was in him prime and he was super impressed with Atiq ur Rehman. He is quoted to have said, “this kid bowls as fast as I do.”

For some reason, Pakistani selectors always pick raw young pacers for Australian tours. It seems odd because it is an extremely difficult place for even our seniors. The tradition is long-established and this young chap was also sent with the team to Australia. In one of the side matches, he bagged three wickets including that of former South Africa captain Kepler Wessels (he also played for and in Australia). Despite that, he was only given a couple of overs in the 2nd innings of the match and then was sent back home when an ageing Sarfaraz Nawaz was recalled.

Some reports said that he was sent due to ill-discipline but there is not much evidence to back this claim. The pacer also toured India and played a non-official 50 over match taking the wicket of Sunil Gavaskar. For someone with as a solid a defence as Sunil Gavaskar, Atiq ur Rehman had him bowled. They say that he got too excited and kept bowling bouncers. Umpires warned him. Plus the ball kept going over the wicket keeper’s head. Not your typical short-form spell. A spell Shoaib Akhtar used to be bowl early in his career, on an off day.

Perhaps, the team management at the time didn’t like Atiq ur Rehman’s confidence (overconfidence for some).

This was the period where Imran Khan was in and out of the side due to a long-standing shin injury. In his absence, somehow Pakistan captains, selectors and coaches failed to give the express pace bowler a chance. Instead, a host of medium pacers were given a chance. Here is a look at the main pace bowlers who filled in 1983-84.

Quite average records barring Imran Khan in limited matches and perhaps Azeem Hafeez. More importantly,, none of these bowlers had express pace, the one thing Atiq ur Rehman had in abundance.

Hence, it is astonishing that he wasn’t given a chance.

Anyhow, still quite a young, he had loads of cricket left in him. Some people might point to his rather average domestic numbers. But given his action and pace, it was expected that he would go for runs. If a bowler has express pace, he is an absolute asset. He needed a guiding hand to be able to perform better. How long did Pakistan cricket persist with Mohammad Sami?

Fate, however, had something else in store for Atiq ur Rehman .

Khan Mohammad, a former cricketer and MCC trained coach, ordered that he changed his action. Atiq ur Rehman that his head used to fall away on delivery, so the action needed changing.

A young man, being told by a well-known coach, he followed his advice.

Soon he had lost most of his pace and bounce. A young thriving career, destroyed due to the terrible coaching. Perhaps Khan Mohammad Sahab had Atiq’s best interest in mind. MCC’s cricket coaching book might not have space for an action like this. Pakistan cricket had always produced mavericks who went against conventional wisdom.  In changing his action, this coach went against everything Pakistan cricket stood for.

A while later, Atiq ur Rehman tried going back to his old action but his shoulder would dislocate every now and then. His body was trained to bowl a certain away for ages. With the change in action, it conflicted with what he had done for years. Muscle memory is a hard thing to fight against. Atiq ur Rehman became aloof and suffered from depression. In 1989-90, he played his last 1st class match.

We have all heard the story of Anwar Ali being destroyed by a change in action. Almost 30 years ago, Atiq ur Rehman suffered the same fate.

Pakistan had a global superstar at their hands and they wasted him completely. So much so, I couldn’t find a decent picture of his to make a cover image for the blog.