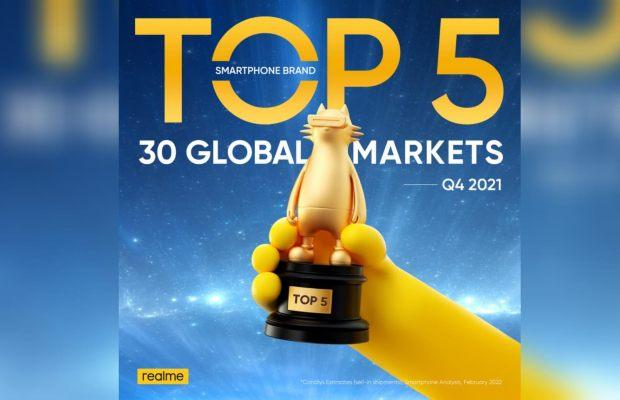 Being the youngest brand among the world’s top 6 smartphone brands, realme has surpassed the odds to maintain strong growth momentum and has delivered a record-breaking performance in global markets, aligning with its core value of “Dare to Leap”.

According to the latest Canalys data, realme’s market share was ranked among the TOP 5 in 30 markets and 6 regions globally in the fourth quarter of 2021, with the No. 1 spot in the Philippines and Bangladesh as well as a number of new TOP 5 entries including Germany, Peru, Colombia, and the Western Europe region.

realme’s smartphones, featuring leapfrogging performance and trendy designs, have been well-received in key global markets. Canalys data showed that realme’s market share in India rose to 17 percent, increasing 48 percent over the previous year. Noticeably, realme has been the only brand among the top 5 to register positive growth in the world’s second-largest smartphone market. 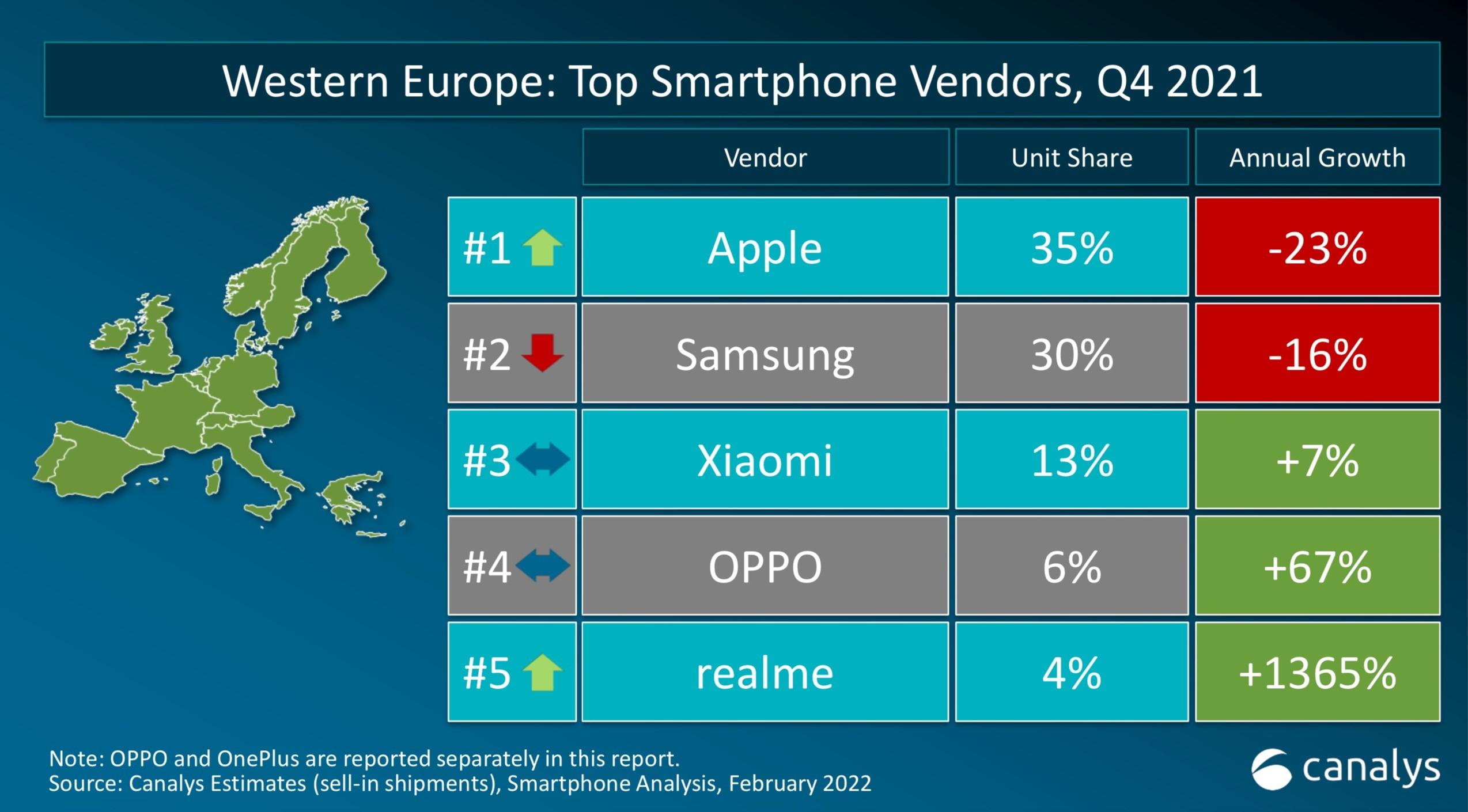 In Europe, realme has achieved a new milestone with a YoY growth rate of nearly 450%, making it the fourth-largest smartphone brand in the region. In Western Europe, realme has witnessed a whopping 1365% growth rate and stood as a TOP 5 smartphone vendor for the first time. The growth momentum has been mainly driven by continuous breakthroughs in Spain and Italy as well as exuberant performance in Netherlands and Germany, where the brand has moved to TOP 4 and TOP 5 respectively for the first time. In Central and Eastern Europe, realme has registered a 11 percent market share and taken the TOP 4 spot. Greece, Poland, Czech Republic, Ukraine, and Belarus have all witnessed robust growth where realme has moved up to TOP 3. 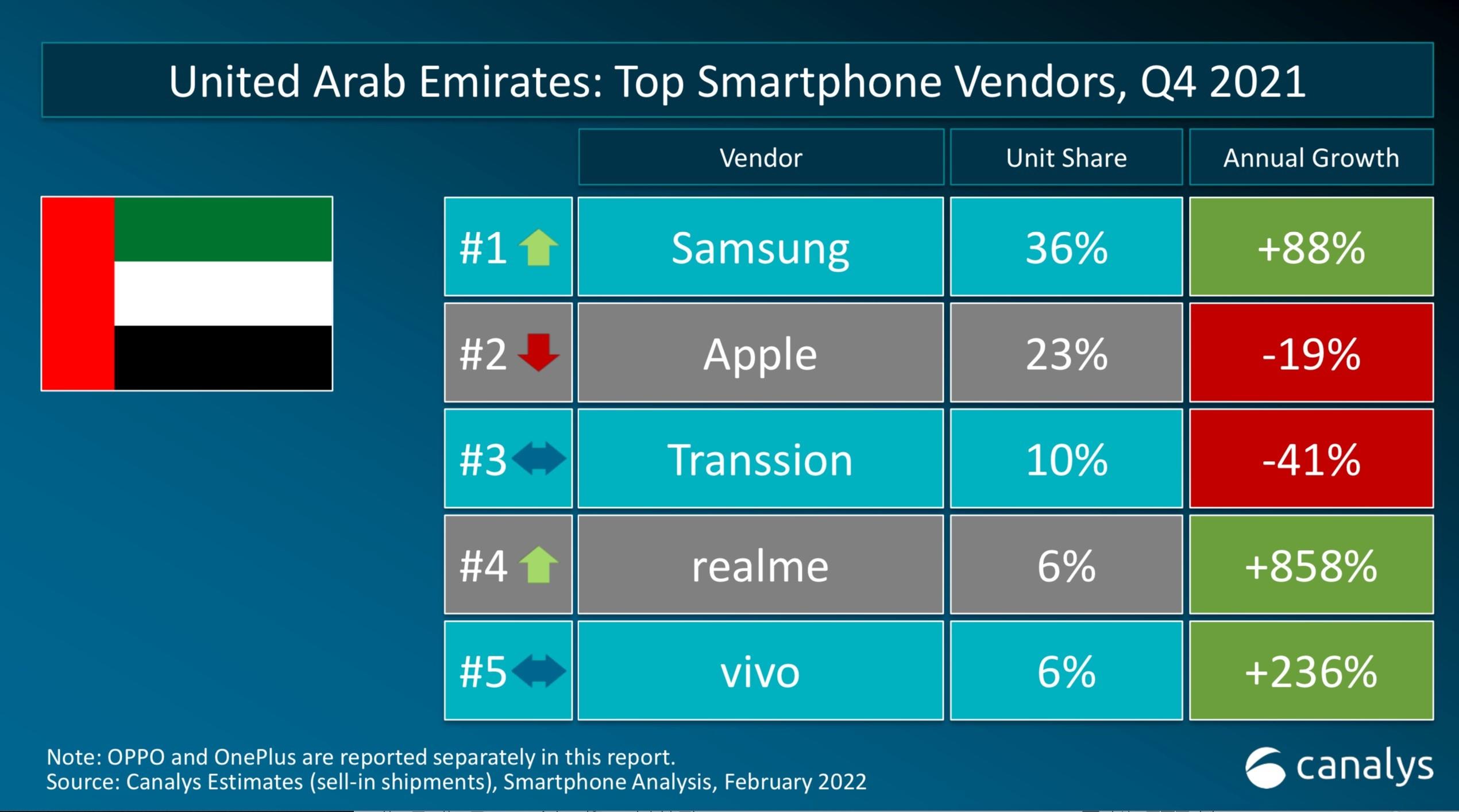 The brand’s distinctive and competitive products have also continued to gain wide popularity in emerging markets with rapid growth. realme has maintained a TOP 5 smartphone brand in Southeast Asia while making new breakthroughs in Latin America, the Middle East, and Africa. realme has moved up to TOP 4 in Thailand, Myanmar, UAE, Egypt, and Morocco as well as pocketed a fresh TOP 5 spot in Peru and Colombia.

Seeing as it is only a three-year-old upstart, realme has wrapped up a very fruitful year in 2021 with a strong Q4 performance. “The company has been laser-focused on providing the best performance in the segment to customers worldwide with leading tech innovations, which has started to pay off,” said Sky Li, Founder and CEO of realme, “in 2021, our annual smartphone sales volume reached a record high of 60 million, a 50% increase over the previous year. In 2022, we will continue to deliver new and exciting products to our fans globally.”