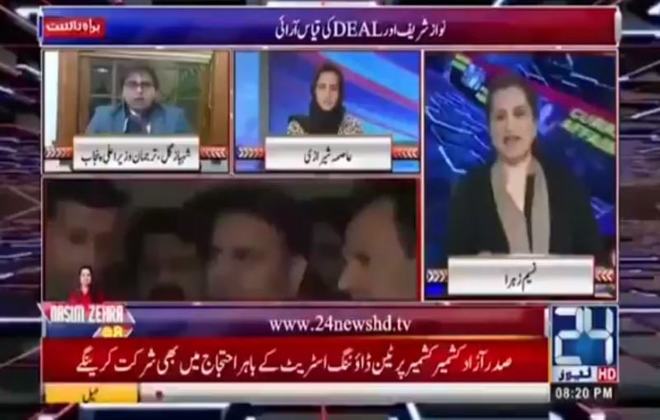 After being welcomed into the panel, Shahbaz said, “I think Asma Shirazi is a hardcore PML-N supporter and I respect it and she has an association with them.”

Program Host Nasim immediately responded cutting him off despite his insistence to let him continue, and said, “No. Shahbaz, hold on a second, I need to say this. She (Asma) criticizes everyone (all parties). Let’s stay with the facts. I needed to say this. I’m sorry. But you need to respond to her (Asma’s) criticism [not her work].”

Asma Shirazi later shared the clip from the show on Twitter and wrote, “Quite disappointing that CM Punjab Spokesman @ShabazGil instead of arguing with logic and performance attacked me professionally during @NasimZehra program on @24NewsHD and then launched a barrage of abuses on social media trough planted trolls. This is how they are dealing media”.

Quite disappointing that CM Punjab Spokesman @ShabazGil instead of arguing with logic and performance attacked me professionally during @NasimZehra program on @24NewsHD and then launched a barrage of abuses on social media trough planted trolls. This is how they are dealing media pic.twitter.com/O6OYtqfrN6

Later, Shahbaz Gill also responded to Asma’s tweet. He wrote, “I [have] always respected you and will never pass any bad comment or encourage anyone for [any] such thing. Although you passed personal comments on me like ‘chaplusi day job, sharam, taat ki soch’ but it is okay. It must be out of anger. No hard feelings.”

I respectfully disagree @asmashirazi Sahiba. I always respect u & will never pass any bad comment or encourage anyone for such thing. Although you passed Persoanl comments on me like (chaplusi day job, sharam, taat ki soch) But it’s ok. must be out of anger. No hard feelings https://t.co/iNTVOujU1O

Following this debacle from the live talk show, many of the famed journalists, political figures and other celebrities came forward to lend their support for Asma Shirazi. Here is a selection of few messages being shared on Twitter.

Asma Shirazi is hard working journalist. She started her career at a time when it was not easy for a women journalist to go out in the field. In any journey there are ups and down, praise and hate and above all professional jealousy. She has come out from all this with courage.

You dealt with this very appropriately. There should be zero tolerance for bullying. https://t.co/6JHmYV6P0M

Well done, Asma. So pleased you stood up amd forcefully rebutted these uncalled for remarks.

.@asmashirazi is a fearless journalist, speaks her mind & reports facts. Her fault is that she is a democrat &does not pander to forces of authoritarianism. Journalists have to question and uphold constitutional rights for there can be no #freepress w/t that.
Stop harassing her. https://t.co/HPr5GENgy7

Good for you @asmashirazi
He is the most loud mouth liar. https://t.co/Q3KYtJgdV8

Asma Shirazi @asmashirazi is a thorough professional and an honest journalist. Casting doubts about her journalistic integrity is unjustified. https://t.co/MxTA0dDqQ1

It’s the first time that Govt spokesmen (actually a PR job) have been tasked to target professional journalists on tv and social media who do not toe line. Asma is not the first and neither will be the last, but well done @asmashirazi for taking such bullies head on. https://t.co/a6PYT72c1r

Shame on those trolling journalists..
More Power to Asma Shirazi.. she is one brave journalist. https://t.co/3cXwF0cyQr

.@asmashirazi is one of the finest journalists; a person of impeccable integrity. Those attacking her are only exposing their mindset. Fighting fascists back is the only way forward.

This man exposed himself that how little he knows about u and journalism in Pakistan. @asmashirazi you always make us proud ur reaction is superb. Many prayers and best wishes. https://t.co/1p9YmuWz8Q

Mind-boggling to see important government positions occupied by people who have no sense of responsibility, accountability or an understanding of history. A well measured response by @asmashirazi https://t.co/PROYgOHjKh

No need for any explanation or justification sis. You are a truly graceful, professional, intelligent, competent and caring journalist and anchorperson -my favourite as well. Just ignore as not worth it. Stay blessed.

If only I could ever speak up like @asmashirazi , KUDOS Asma, you are a hero https://t.co/lIW1YOGvJO

She inspired us as a woman of substance, an upright journalist, a loving mother and a fighter. Her work and conduct is exemplary. I am proudly supporting @asmashirazi .#AsmaShirazi pic.twitter.com/xbzhTlEMIU

tweet
Share on FacebookShare on TwitterShare on PinterestShare on Reddit
Saman SiddiquiFebruary 6, 2019
the authorSaman Siddiqui
Saman Siddiqui, A freelance journalist with a Master’s Degree in Mass Communication and MS in Peace and Conflict Studies. Associated with the media industry since 2006. Experience in various capacities including Program Host, Researcher, News Producer, Documentary Making, Voice Over, Content Writing Copy Editing, and Blogging, and currently associated with OyeYeah since 2018, working as an Editor.
All posts bySaman Siddiqui