And the episode is a complete laugh riot! 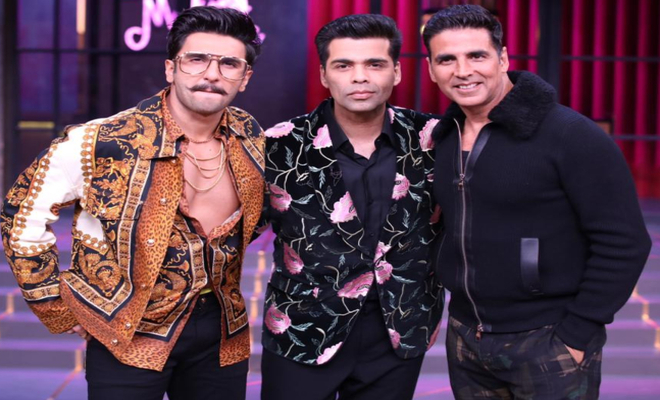 The latest episode of the talk show Koffee with Karan, was another hit with the celebrity guests offering a cringe worthy moments to be remembered for a long time. The episode begun with Karan sharing how he’s a mamma’s boy and will continue to be so. The guests for this episode were Ranveer Singh and Akshay Kumar. There was a spark of satire on this week’s episode.

There was a fan moment during the show, when Karan asked Ranveer about when he first time he met Akshay Kumar. There was a detailed reply, Ranveer revealed that he was just a kid when he first time met Akshay that too on a set of a film shoot. Ranveer told he was a young kid when his cousins from Canada had come visiting and really wanted to meet Akshay Kumar. His father made some calls and the kids all went to a college in Mumbai where Akshay was shooting for Keemat (1998).
That fan moment was shared on Instagram by Ranveer Singh, who at the time had a Mohawk hair style.

Both KoJ and Akshay, pulled Raveer’s leg saying no one does wedding parties better than him!

Karan Johar also made fun of Ranveer asking questions about his outrageous fashion sense, by showing him a few pictures of his outfits. And the tables were turned when Ranveer put the blame squarely on Karan and saying that it is actually Karan, who hands him down these clothes when he doesn’t have the confidence to carry them off.

It was revealed by Ranveer that the tracksuit he is seen wearing in the photo is worth Rs 3.5 lakhs and was given to him by Karan. Karan, however, made the point that the two pieces were not meant to be worn together.

There were so many hilarious moment in that episode as well as few serious note worthy mentions made. Answering upon Karan’s questions, Akshay choose Amitabh Bachchan as his favourite legend, Vicky Kaushal as a better new-age actor and Salman Khan as the Khan he admires the most. On being asked On being asked who is the hottest apart from his wife, Akshay told Deepika’s name and leaving the groom-to-be
smiling. Akshay also shared that if Twinkle ever makes a comeback, she’d star opposite Aamir Khan.

Karan also questioned Akshay about his worst habit as a husband:

Overall, this episode was high on fun and the fans can’t get enough of these two Bollywood celebrities.

tweet
Share on FacebookShare on TwitterShare on PinterestShare on Reddit
Saman SiddiquiOctober 30, 2018
the authorSaman Siddiqui
Saman Siddiqui, A freelance journalist with a Master’s Degree in Mass Communication and MS in Peace and Conflict Studies. Associated with the media industry since 2006. Experience in various capacities including Program Host, Researcher, News Producer, Documentary Making, Voice Over, Content Writing Copy Editing, and Blogging, and currently associated with OyeYeah since 2018, working as an Editor.
All posts bySaman Siddiqui