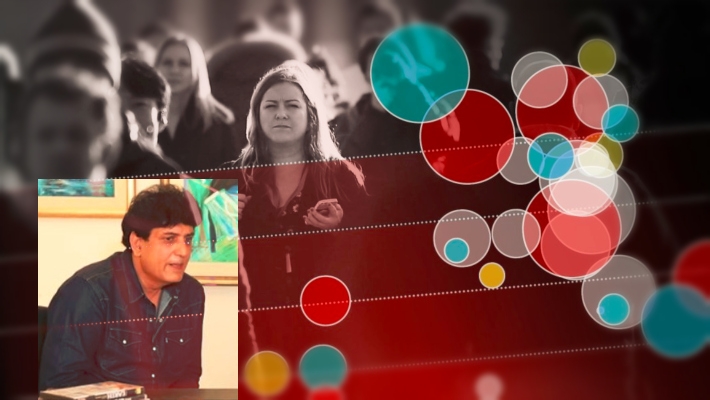 If you aren’t living under a rock, though at this point we wished we were, you must have come across supposedly acclaimed writer Khalilur Rehman Qamar’s recent spill of magic beans aka ‘the interview’. We too had the unfortunate instance of seeing it and indigestion took over the body in such a manner that khaya Piya hazam kiya hasn’t happened in over three days.

But without going into the details of the already famous interview, there were a few facts that we thought we might clear for Mr. Qamar who happens to live in a parallel universe where men are mere overly grown babies and women belong to the tribe of either savages or prey. For the “aced” writer women are only of two types, white and black, good and bad, women and non-women – umm excuse me?

No, Mr. Qamar, it’s not that simple or per se complicated either. Women are not just the vamps or victims that you show in your dramas. They aren’t either the epitome of perfection or reduced down form of sex objects that you like to portray. Women aren’t also the only fact of evil in this world, much to your dismay. And if I may enlighten you, women – pretty much like men – are just humans possessing both good and bad in one individual and falling in that grey area that you fail to see and show through your pen.

Women aren’t the Mehwish you showed who is stone-hearted, cold, bitch-face mode at all times who has lost all sense of compassion for money. Women aren’t also the sacrificial cows that you place in high regard.

Oh and men… Men are definitely not Danish, my dear Mr writer.

You see the problem is that women, regardless of whether you still consider me one or not, are a mix of many emotions and shades. While we are sensitive daughters, we are the strongest mothers. While you may find us, devoted wives, we are absolutely uncompromising daughters in law. You see we don’t claim to be perfect or superior, but we do claim to be as human as a man – the very man who in your opinion does not have the capability to say no. Sorry? Come again!

Have you heard of a young girl from rural Sindh who was deprived of education because a man said no? Would you like to show her in one of your much-hyped dramas someday? Did you hear of the woman who walked out of the marriage because her husband denied respecting her parents? Do you think she can be shown in your next serial without the prejudice of setting her as a bad woman’s example?

Or let’s say, do you know women who are doctors, engineers, artists, finance experts, who refused to conform to social norms and became a success in their fields. Do you think such women deserve representation in your films? Do you think you can do justice to the many shades these women possess? They might be horrible bosses but amazing wives. They might be struggling wives in unhappy marriages but super mothers?

Do you still think they are only good or bad?

No, Mr. Qamar, women cannot only be the versions of what you perceive them to be. They have been and evolve to be much more than the extremely narrow sight you can see. They are quite different from each other, quite better than your monotonous characters and definitely far superior to your representation.

Oh, and I am not even talking about equal rights and opportunities for women like men. All I am seeking from a self-proclaimed feminist like you is a bigger heart and better vision to see women for who they are, not just who you want them to be – victims or vamps.