Social media users are expressing their disgust over the leaked video clip. 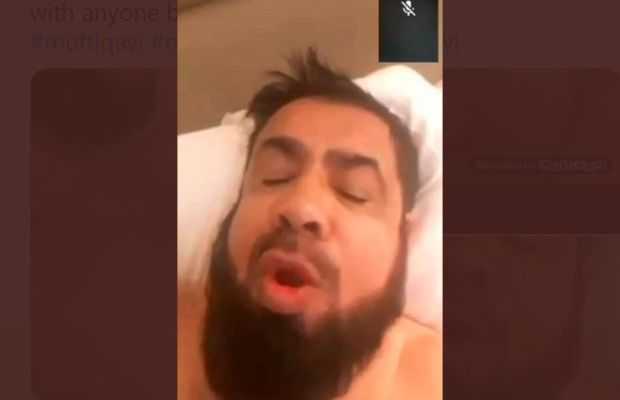 When it comes to creating controversies, Mufti Qavi is an infamous figure to attract headlines for his non-religious activities.

This is not the first time that Mufti Qavi has made his way to the limelight for his controversial remarks or actions.

In this latest episode of the alleged leak video, the former cleric is back in the news that has surpassed all the limits of vulgarity being associated with him.

As soon as the leaked clip went viral on the social media hashtag #MuftiQavi started to trend on top by Tuesday evening.

Reportedly, after being exposed by TikToker Hareem Shah for inappropriate conduct, Abdul Qavi has stripped off of the title of ‘Mufti’.

He was reportedly sent for mental help by his friends and family, however, after the recently leaked video, it seems to be a case other than poor mental health.

The viral clip features Abdul Qavi naked appears to be recording the video for someone and trying to seduce the recipient of the video.

Social media users are expressing their disgust over the leaked video clip.

It’s a #Mufti season.
Mufti Qavi is a legend. He wants world to see the ‘Little thing’, he can not see himself …
DON’T WANT TO SHARE THE FULL VIDEO HERE. #MuftiQavi #MuftiAbdulQavi pic.twitter.com/hnZ86IRzMa

After a long hiatus, Mufti Qavi is back in the News with another video that has surpassed all the limits of vulgarity showcased by him in his previous episodes with 2 actresses. This time the disgraced scholar is not with anyone but himself.#muftiqavi #muftiqawi #MuftiAbdulQavi pic.twitter.com/pZ2cGdVJZR

The leaked video is keeping the meme brigade and the keyboard warriors occupied as well!

Me just reaching twitter to figure it out "Mufti Qavi" pic.twitter.com/jlThx6teTm