Sara cleared that she shares a bond based on friendship with Kareena. 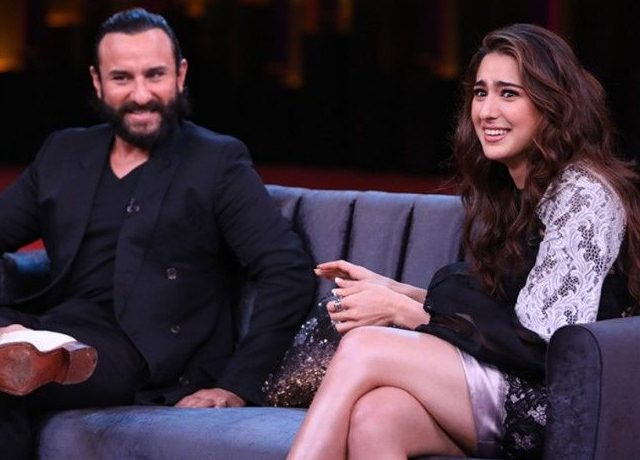 Karan Johar welcomed the ‘dynamic duo’ of father Saif Ali Khan and his daughter Sara Ali Khan on Koffee With Karan. He asked the starlet on how happy she is with the modern family setup where her dad Saif has moved on in his life and so has mom Amrita.

Sara positively said she feels happy to see she has two comfortable homes than one unhappy one. She also revealed that her mother Amrita dressed her up for Kareena and Saif’s wedding function.

“My mom dressed me for my father’s wedding. A lot of people would be of the opinion that Kareena was being weird or mom was being weird. It was very comfortable. Everyone was so mature. It was not a big deal.”

As for Saif, he shared how he wrote a note to Amrita the day he got married to Kareena.

“When I was getting married to Kareena, for some reason, I wrote a note to Amrita saying this is a new chapter starting. I wrote we had a history and something on the lines of good wishes for both of us. I sent it to Kareena to take a look. I sent it across. Sara called me and said, ‘I was coming anyway but now, I am coming with a happy heart.’ I think that story sums up the attitude of everyone involved,” he said.

“Everyone has been clear about their dynamics with me. It has never been confusing. Kareena herself says that ‘look you have a mother and a great one and what I want is for us to be able to be friends.’ My father also never said ‘this is your second mother’ or made it any way uncomfortable,” cleared Sara adding that she shares a bond based on friendship with Kareena.