Yasra Rizvi shared pictures and messages from a recent campaign on toxic marriages. 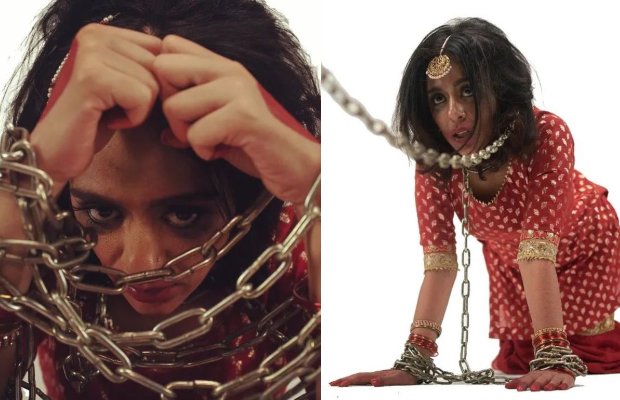 Yasra has emerged on the internet clad in a bridal red colour dress-wearing smeared makeup and handcuffed in chains to depict the distress and sorrow caused in abusive marriage relations.

Yasra has shared special messages in the caption of each image to highlight her campaign on toxic marriages.

One of her posts also gained attention from the Indian actor Ayushmann Khurana.

The caption on one of the shared images says, “Forced marriages and divorce shaming are not ways to respect tradition these are blatant attacks on basic human rights and sadly the most common and accepted ones around us. This needs to STOP! Figure out what you are going to do about it.”

In another caption of one of these images, The Dunk actor adds, “Getting married or not is a personal choice. Everyone has the right to decide who they want to marry, when, and how.”

“And if a person makes the wrong decision, given the marriage becomes overbearing, then ending it is also one’s right. This is not a western agenda but a right given by law and all religions, based of course, on common sense. Since eventually, only the individuals involved in a marriage deal with its consequences,” Yasra says.

“Stand up for your daughters and sisters and friends and female relatives and abused neighbours or that random woman being beaten up by her husband in a restaurant while he says ‘yeh hamara aapas ka maamla hai’ before you get to carry one of your own to the graveyard just because you were too busy being polite!“, reads caption of the third photo shared on Yasra Rizvi’s Instagram handle.