Nazish Bhabi pushes Abeer so hard that she lost her pregnancy 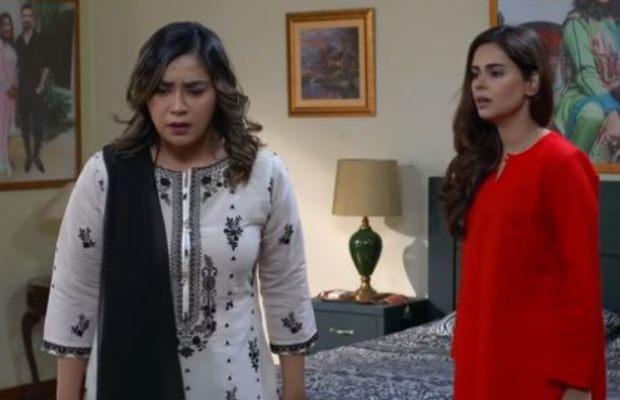 Baddua the drama serial airing at ARY Digital has turned problematic with its narrative and unimpressive performances. Amar Khan’s performances at a few places seem to be short so are by some new faces in the play. In the previous episode, Abeer is creating her negativity. In this episode, Abeer loses her child by felling down when Nazish Bhabi pushes her so hard.

Abeer continues on planning negative stuff about all the people around be it Neelum or Nazish. Well, her jealousy with Neelum is making sense but then why she is being so negative with Nazish she has always been so nice to her. Well, Abeer is simply being pathetic and vile she is thinking about how she will going to use her child in her favor and how she will going to control Junaid.

Affan is being disappointed because he is being so dumb that he starts believing what rubbish Abeer is saying about his wife Neelum. Abeer is so vile that she starts tarnishing Neelum’s character in front of Affan telling him that she is having an affair with Junaid. Affan starts believing in that shit for a while then his eyes open when he sees Neelum with her friends.

Abeer is so pathetic that her malice does not stop with Neelum. She starts bugging Nazish too. By the way, why has Abeer has to tell Nazish about that pathetic dream and what she is expecting in return. She gets the most deserved response from Nazish, she throws her out of her room but she pushes her so hard that she falls down on the floor hurting herself which eventually leads to the loss of her pregnancy. Abeer lost her child because of Nazish pushing her so hard and this has scared the hell out of Nazish.

Nazish knows that unintentionally she has committed a terrible thing. Junaid and her mother-in-law are not going to spare her if they know the actual reason behind this miscarriage. She begs Halima Bowa not to tell anything to her family. She agrees only when she gives her Abeer’s sake. Nazish tells her mother-in-law on the phone that Abeer slipped on the floor. Junaid is anxious to know about his child but Nazish drops the call. Abeer’s position in the house has got worsen. We are wondering now what she will do with Nazish?