Aleeza is too naive to see the reality 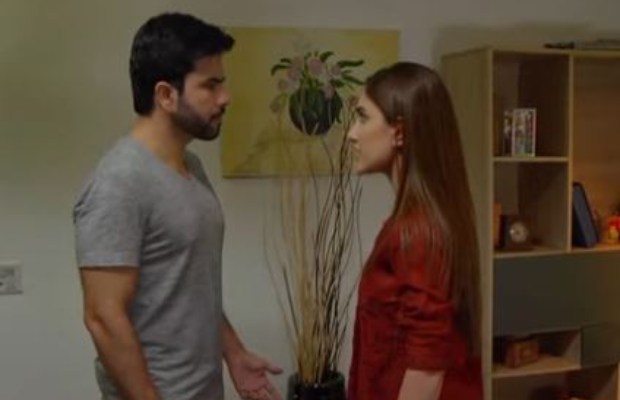 Ek Jhoota Lafz Mohabbat the drama serial airing at Express Tv is reaching new heights of toxicity the narrative is too disturbing to digest. The sister rivalry has made everything so ugly. In the previous episode we have seen Areesha eyeing Maaz and using her tactics to get him. In this episode too she shamelessly continues her pursuit.

The episode begins when Maaz is in the office and a colleague of him is giving him relationship advice. The colleague who seems an inferior of him in the office is telling him not to pursue Areesha’s advances and he warns him never ever to think of leaving Aleeza. Well that setting is certainly quite inappropriate for such type of personal discussion.

Maaz’s sister is playing a very vital role in saving Maaz’s house. She is not naive like Aleeza, she knows Areesha quite well and she is resolute that she will kick Areesha out of the house. Maaz’s sister suggests a very decent proposal for Areesha, she calls Maaz’s sister to inquire about the details of the guy and when she comes to know that he doesn’t have a rich background she simply says no on that proposal. Areesha creates a lot of hue and cry over this proposal issue in front of Aleeza and Maaz.

Areesha calls Maaz to her bedroom in the middle of the night and she starts pressurizing him to say that he will marry her. She is mad at him that why he is not disturbed on her proposal issue. When Maaz tells her that he want to stay loyal to his wife Aleeza and that he cannot marry her, Areesha stoops so low that she creates a fake drama to cut her nerves. She tries a faint attempt to frighten Maaz but Maaz stays firm at his point. This drama has not helped her in convincing Maaz to marry her.

Maaz’s sister tries her best to convey to her mother the real ugly face of Areesha, she tells her that she has not straight away said no to her but she has asked about the details of that proposal then rejected it when she came to know that the guy is not rich. Well Maaz’s mother is even more vile than Areesha she is not ready to listen to her own daughter. Maaz’s mother breaks the new records of toxicity, she starts cursing Aleeza in front of Areesha and tells her to get out of the house and that she will get the divorce. Will Aleeza be naive enough to leave the house immediately or will she wait for Maaz?

tweet
Share on FacebookShare on TwitterShare on PinterestShare on Reddit
Rameeza NasimNovember 26, 2021
the authorRameeza Nasim
Rameeza Nasim, a Paralian, passionate about poetry, drama and fiction. By giving drama critiques I feel like I am endorsing the writer's message to the audiences, I love my job. Being a critic responsibility lies on my shoulders to point out the flaws and shortcomings of the play be it on writer's , performers or director's end . I did my Masters in English Literature and Linguistics .
All posts byRameeza Nasim