Hooriya's sisters are very rude to her 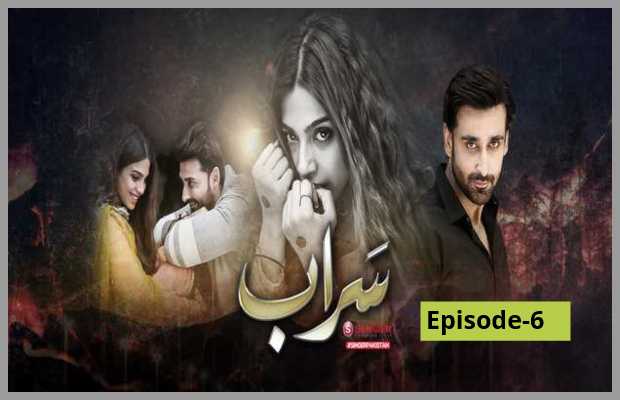 Saraab the drama serial airing at HUM TV is based on mental health issues where the main character is shown a schizophrenia patient of the advanced stage. The best thing about this play is the powerful performance of Sonya Hassyn and Sami Khan. The rest of the characters particularly Hooriya’s family members are very annoying.

The episode begins with a hard slap on poor Hooriya’s face by her father. He is not suppose to slap her like that, Hooriya’s father seems the only sane person in the house but it is later shown that he is not different then rest of her family. Hooriya’s father very coldly talks with Asfand’s father and tells him that he does not want to see Asfand in his house.

Moreover Hooriya’s father decides that he will take Hooriya to some Dargah Shrine in Interior Sindh for treatment. What a brilliant idea! Instead of taking her to some psychiatrist for a therapy, he has decided to take her to a shrine! Well unfortunately this is the most common phenomenon, most of the people in our society are having the same mentality. Mental health is mostly neglected in our part of the world.

Mental illness is often mistaken as supernatural influence or magic and instead of curing the patients with proper therapy and consultation, they are often taken to shrines and Peer Faqeer for treatment and unfortunately, their mental condition gets worse in this case. We are fearing that Hooriya’s condition which is already in advance stage might get worst. Hooriya has no family support. Her sisters treat her so badly, Warda is not less then Namal. Warda being the eldest sister should have politely talked with her sister but no she is just like her mother, ill-mannered and rude. There is no one in the family where Hooriya can share her heart out.

Well Asfand’s sister who gets so irritated even at the mentioning of Hooriya, tells her brother that Hooriya’s family is taking her to some shrine at Sindh for treatment. Asfand has made up his mind that he will to save Hooriya from this. He shares with his sister that Hooriya has some sort of mental illness but this is not the treatment for it. Asfand’s parents particularly his mother are not ready to help him in this so Asfand decides that he will go alone but he will save Hooriya from all this. Will Asfand going to realize from which mental illness Hooriya is going through and how will he get her treatment done?

tweet
Share on FacebookShare on TwitterShare on PinterestShare on Reddit
Rameeza NasimSeptember 27, 2020
the authorRameeza Nasim
Rameeza Nasim, a Paralian, passionate about poetry, drama and fiction. By giving drama critiques I feel like I am endorsing the writer's message to the audiences, I love my job. Being a critic responsibility lies on my shoulders to point out the flaws and shortcomings of the play be it on writer's , performers or director's end . I did my Masters in English Literature and Linguistics .
All posts byRameeza Nasim