Akbar sends henchmen to kidnap Rania and her son but in the scuffle, Alizay’s mother gets killed and she dies soon after. 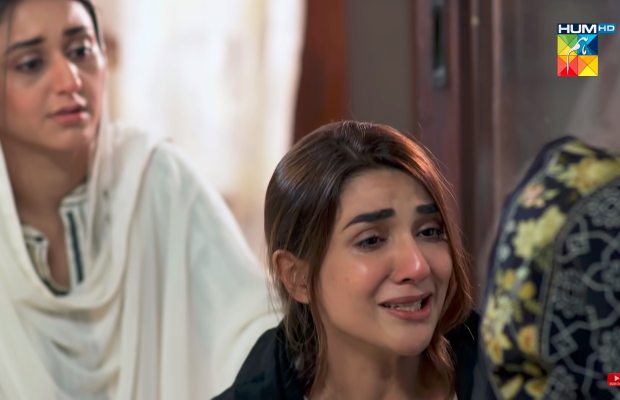 This week, Rania adjusts to her life in Alizay’s place. She realizes how she wronged Alizay when she would take care of her and how Alizay has been nothing but kind towards her during Rania’s time of need.

Tabrez ends up at Alizay’s place while looking for Rania. She tells him she doesn’t want to go back to a house where people are greedy and selfish.

Shehrina, Alizay’s sister-in-law is upset when she sees her husband looking after Rania’s kid while she prepared food for him.

Akbar sends henchmen to kidnap Rania and her son but in the scuffle, Alizay’s mother gets killed and she dies soon after. Alizay is grief-ridden and is unsure of what to do now.

Tabrez’s father reprimands Akbar for sending armed men to kidnap Rania when he could’ve just sent local goons without any weapons. He is worried about what will happen when everyone will find out that he was involved in Alizay’s mother’s murder. Akbar assures him nothing of that sort will happen.

Tabrez’s mother comes to Alizay’s house to pay her condolences but it’s all an act. She asks Rania to come home with her but she doesn’t want to go. Tabrez also tells his mother that he will bring Rania home when things get better.

While Alizay is talking to Tabrez, Shahrina interrupts them. She ridicules Alizay for bringing a bad name to the family because of her failed marriage. While she says all of those hurtful things, Tabrez listens on.

Alizay’s kindness and resilience against all odds are truly commendable. Rabab Hashim plays her with such genuineness and a sense of beauty you just want to protect her at all costs. Noor Hassan’s Tabrez is a man who is caught between right and wrong is outstanding. Both of these are scene stealers in every sense of the word.

Will Rania come home? Will Alizay be with Tabrez? To find out, watch this space and keep watching Sila-e-Mohabbat on weekdays only on Hum TV.