It unveils Carol Danvers in a train fight scene! 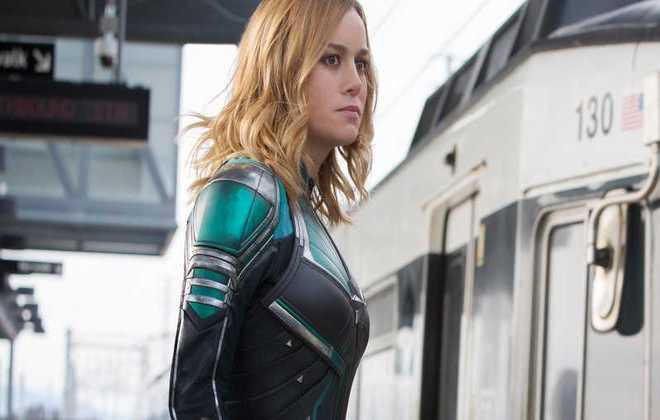 Captain Marvel will be released in cinemas on 8th March. But ahead of the film’s release, Brie Larson aka Captain Marvel shares a new clip from the upcoming film.

The upcoming film will see Brie Larson’s Carol Danvers transformed into a superhero, who will also be dealing with some shape-shifting aliens called Skrulls.

In the clip, Carol can be seen fighting atop a train against a Skrull pretending to be a middle-aged man, while the younger versions of Nick Fury (Samuel L Jackson) and Phil Coulson (Clark Gregg) race beside the train to keep up with her.

Ahead of film’s release the film also had a private screening for a limited audience. And the reactions from a test screening for Captain Marvel arrive on social media.

Hearing #CaptainMarvel screened. After it ended everyone was talking about the cat. Stole the show. Must. See. This. Movie. Stat. pic.twitter.com/WRozSmpbdX

Recently I saw #CaptainMarvel⁠ ⁠ test screening and OMG what an absolutely FLOP! I’m expecting a 63% RT score, it felt so lazy UGH why #marvel

Just got to see a test screening of #CaptainMarvel⁠ ⁠! Let me tell you right now, do not believe the rumors! This movie is beautiful and stunning. The acting is really good, this is easily one of the best movies ever! You guys are going to love this flim!