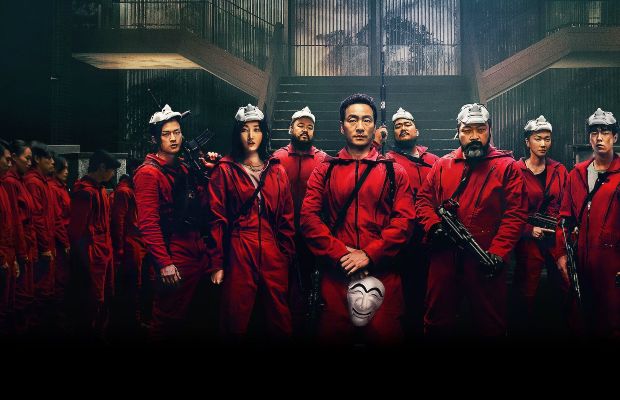 Keeping in view the application for its original South Korean series Squid Game, high expectations for being associated with this latest remake. But for me, being a vivid South Korean Series viewer, don’t watch it keeping La Casa de Papel in mind.

The six episodes first part left the audience on a cliffhanger, thinking will Professor be caught or not?

Each episode begins with a brief flashback about how these different characters came to be under the Professor’s wing. But episodes 3 and 5 are the most intense.

And perhaps waiting for part 2 to arrive at the OTT platform is going to take a while.

Remakes are never my cup of tea, and when there are so many original hit K–Dramas with plots based on heists, North and South Korea rift, the rating for this Money Heist:  Korea -Joint Economic Area, is going to be 6 out of 10!

In a single para, the review of the film will be: A slick geopolitical makeover to hit Spanish thriller series. Having an ensemble cast. The series is based on the storyline which is largely the same as the original one, with the criminal mastermind the Professor assembling a break-in gang to steal money, but the setting is a newly unified Korea.

Read ahead, keeping spoilers in view!

The series is set in the near future 2025, where North and South Korea are not unified geographically but by means of a geopolitical entity named Joint Economic Area on what used to be the border between the two countries.

Veteran actor Yoo Ji-Tae, as the professor, gathers together a motley crew of criminals and masterminds to set a heist at a national mint, the Joint Economic Area.

The gang’s plan is to steal 4 trillion won from the mint, after disguising in red tracksuits and masks, which they also made the hostages wear.

Yoo-Ji-Tae as aka Professor of Money Heist doesn’t appeal that much maybe because we have seen him in kinda similar roles, for instance in the series Mad Dog, as Choi Kang-woo, former police, and leader of Taeyang Insurance’s investigator’s team, decides to create his own investigation team, after an airplane crash.

And as well as in the movie, The Swindler, a prosecutor with secrets to hide teams up with a tough criminal to find a master con man who faked his own death.

We have already seen too many of such teaming up, so nothing new.

Just like the original series these thieves are told to select code names based on cities. It’s Heist Planning 101: the less they know about each other’s personal lives, the safer they all are.

So we get to see Professor’s 8-member squad adopting the aliases Berlin, Denver, Helsinki, Moscow, Nairobi, Oslo, and Rio.

While Jeon Jong-seo plays Tokyo, a young North Korean fan of K-pop boy band BTS who has served in the North Korean army joins the army and, she moves to the South following unification, with dreams of freedom but becomes a wayward criminal.

At this point, I leave the other characters to be discovered by the viewers.

After Professor’s gang take over mint, there comes the joint team to resolve the crisis and negotiate with the criminals.

For the new viewers, the tension existing between North and South Korea would be a new rapprochement however, it has long been a popular subject for Korean filmmakers.

K-Drama and film viewers are already familiar with the joint Korean investigation concepts.

Watch the films Steel Rain and Confidential Assignment both spawned sequels, while others like The Spy Gone North and the recent series Snow Drop delved deeper into the subject.

And that’s why this Netflix series’ story plot lacks uniqueness.

We now have to wait for part 2, which is likely to feature the remaining 6 episodes to conclude the series, if the makers don’t have plans to make Money Heist Korea’s sequels.

tweet
Share on FacebookShare on TwitterShare on PinterestShare on Reddit
Saman SiddiquiJune 25, 2022
the authorSaman Siddiqui
Saman Siddiqui, A freelance journalist with a Master’s Degree in Mass Communication and MS in Peace and Conflict Studies. Associated with the media industry since 2006. Experience in various capacities including Program Host, Researcher, News Producer, Documentary Making, Voice Over, Content Writing Copy Editing, and Blogging, and currently associated with OyeYeah since 2018, working as an Editor.
All posts bySaman Siddiqui